(Class bell rings) Good afternoon class, we are back with another adventure that is sure to knock your socks off. Today`s discovery is definitely a treat for all of your senses. For this adventure,I had to make my way over by Sanjyou, a very popular place for shopping as well as admiring the historical architecture in that area. I was deep in unknown territories of Sanjyou and really got to see another part of Kyoto that I will surely visit again all thanks to this place. Pay attention class as we get into the discovery of UZU. As you take a look at the outside of this restaurant, you believe you have an idea of what you are in for, but you really have no idea. You have the traditional Japanese architecture with the tiled roofs and the simplistic use of elements from the earth. But, as you walk into to the main entrance of the restaurant, your eyes are hit with a beautiful view. 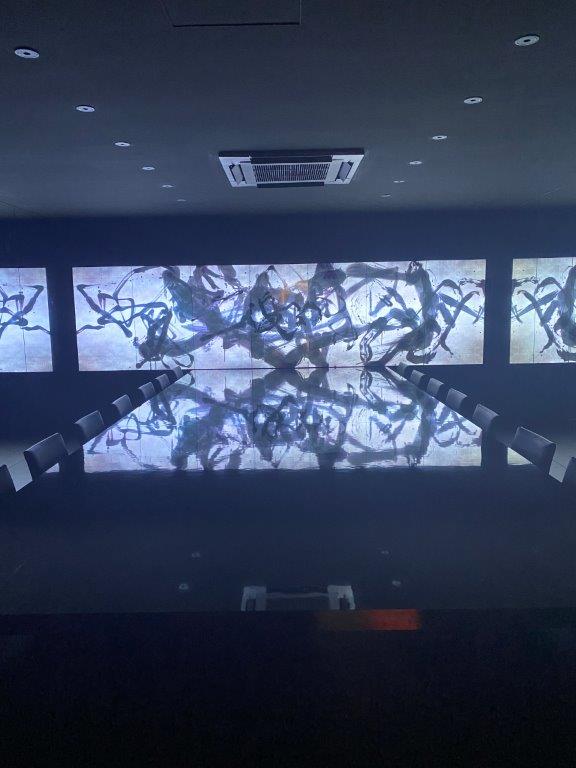 Feast your eyes on this! Wasn`t what you were expecting right? Welcome to UZU, besides the screen display, there was no other light lighting up the room. The restaurant can only occupy 16 people at a time, and the seating is very intimate, everyone is sitting very close to one another. (Due to Corona, one seat is opened up between guests.) You would think this was a 5-star fine dining restaurant. Well, it is, but it is at a price that everyone can afford and enjoy! As I said before, when you walk in, nothing but the digital art on the screen is lit up, but as soon as you sit in your seat, the light in front of you turns on and you are given your menu and eating utensils!

I was so lucky that day as my wife and I were the only ones who were there and we got to enjoy every bit of this great restaurant. We haven’t even got to the food yet, but I bet you are dying to come here! The digital art was thought out and created by a Japanese art group called Team Lab. Not only did we enjoy the visual art, but there was traditional Japanese music playing in the background. All of the senses were going haywire from this very intense new experience.

Take a look at the menu guys, and keep in mind the aesthetics of the restaurant. They have both Japanese and English for their guests. The font, the spacing, the colors of the menu are all screaming simplicity.

Oh yeah, you can read what they are recommending right? If you know me by now, you know I am definitely going to go for the recommendation! If you don’t know what gyoza are, they are traditionally a Chinese dish, called dumplings in English. These gyoza specifically are filled with tons of vegetables wrapped inside a thin layer of dough. After a little bit longer I will show you a better picture of what they look like. 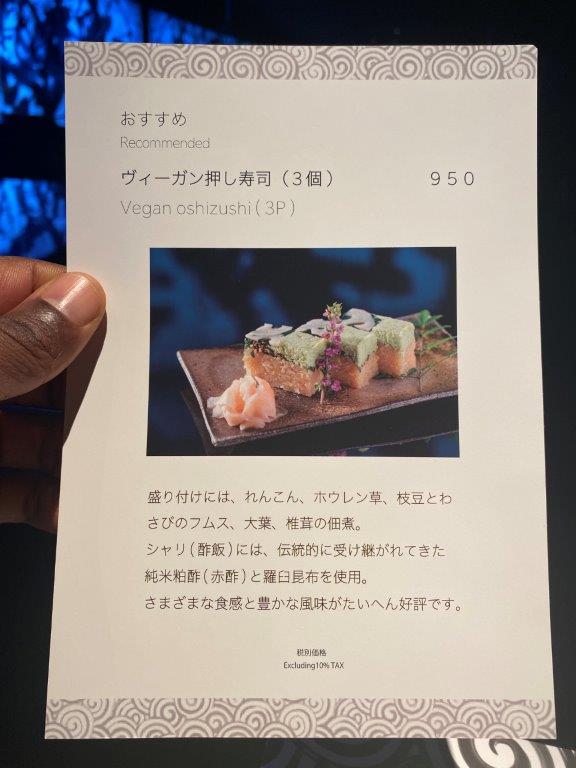 I can see your guy`s mouths are already watering from the gyoza, but let`s keep teasing your taste buds. Yes, you read it right, VEGAN SUSHI! Just a little insider, this was definitely my favorite thing I ate. Hold on tight, more details on the sushi coming later. 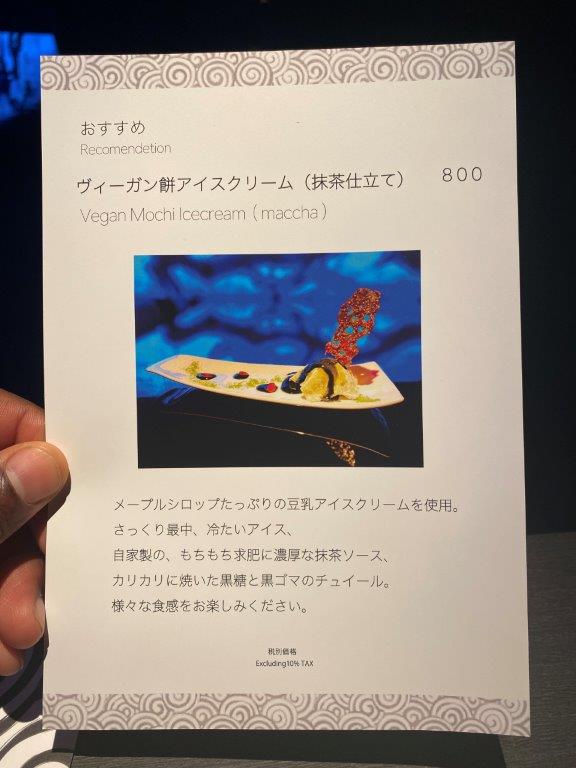 Those of you who also have a sweet tooth, they offer this vegan mochi ice cream. Mochi is a Japanese food made out of rice which has a very chewy texture. I was full from everything I ordered, so I wasn’t able to sink my teeth in this dessert, but based off everything else I ordered, I am 99 percent sure this will not disappoint.

Now let me show you what I ordered!

Grab yourself a napkin and get ready for your taste buds to salivate. To start off my meal, I had a fermented Yuzu drink. It`s a Japanese fruit a part of the citrus family. It is super good on its own, but with the fermentation applied to it with sparkling water, it makes a great healthy alternative for soda. I was blown away with how good it was.

But then, look at what came next. 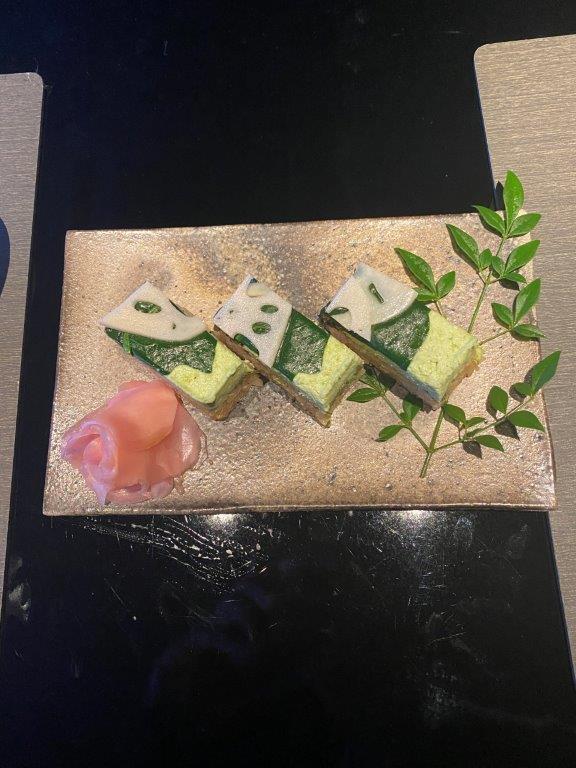 Walaah! Here we have next, the sushi. As I said before, this was my favorite item that I ate off the menu. You get a side of ginger, the sushi had rice with a dash of vinegar, wasabi mixed with edamame which gives it that popping green color, topped off with some Japanese vegetables. The presentation itself is amazing, but the different tastes you experience in the sushi is mind blowing. All the tastes are very distinct but they all mesh well together. My wife and I were in shock because this wasn’t even the main dish. If the sushi tasted this good, we were only imagining what the other things we ordered could have tasted like.

Let`s move on to the next dish.

My mouth is watering along with you guys. Do you see the flakiness of these gyoza? Oh my god, they were so juicy once you bit into them juices were flying everywhere. Again, in the gyoza as well, the flavors were very distinct and with every bite you experienced various tastes between the different ingredients. 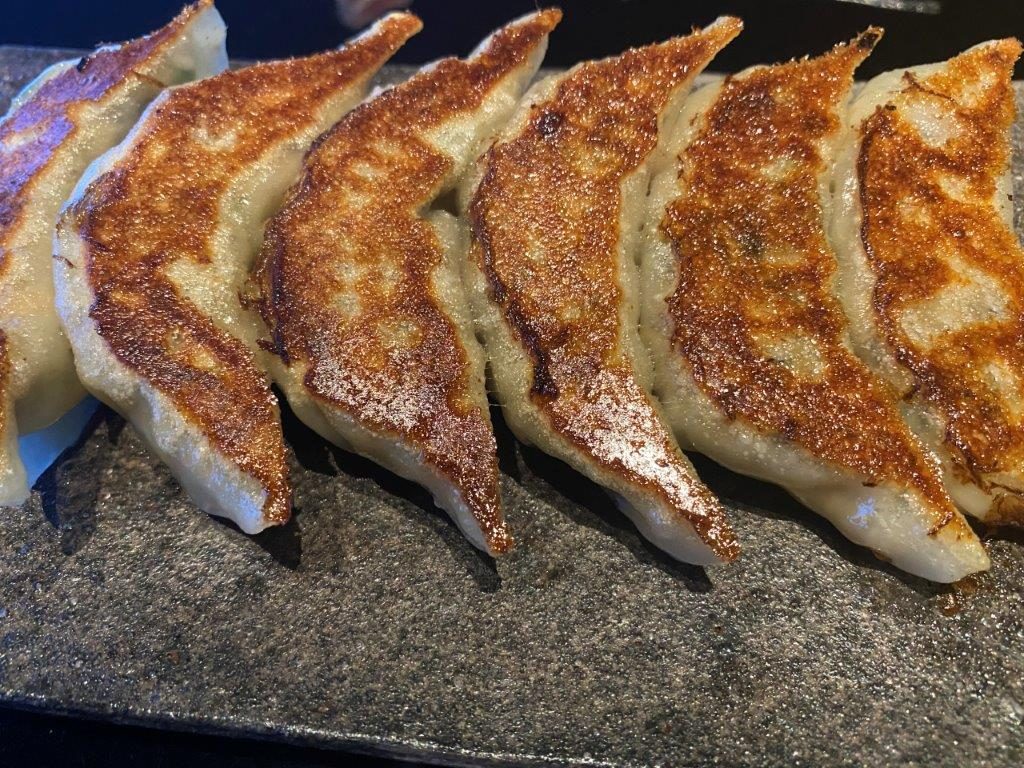 If you couldn`t see how perfect they were already, here is a closer view. Now onto the main finale!

LET`S GET READY TO RUMBLE! You are now witnessing the one and only UZU miso ramen.

In the middle of the ramen dish, you have a tomato, and as the tomato melts into the ramen, you start getting a different taste than when you first started. You can see as I go through all these different foods, the tastes are very unique and distinctive. My wife on the other hand got a spicy ramen. The onion as well provided a different taste as you get through your meal. My wife had no complaints about this ramen. She grew up in Japan and ate ramen a countless number of times. She even said that this tasted way better than any ramen she has ever had!

After the meal, my stomach felt nothing but pure bliss. It felt like I ate just the right amount. The experience at UZU was like no other. I am looking forward to going here again and experiencing not only the great food, but aesthetics of the whole store.

I don`t know about you guys but I am hungry! UZU is by far one of the best restaurants I have ever stepped in and ate at. To give you some background information on UZU, it has only been open for about 3 months at its first and only location in Kyoto. I am sure you are thinking what does UZU mean? The owner of the chef of the restaurant named it UZU meaning whirlpool in English, because whirlpools can bring people in from far places.

I had a few minutes to talk with the owner of UZU and I was just blown away by his thinking. The way he set up the restaurant and the foods that he chose, everything just gave the senses stimuli to react off of. The owner wants to specifically give people a taste of Japanese culture. Not only through your taste buds, but though your other senses as well. Everything in the restaurant was centered around this philosophy. He truly wants people to come to Japan to really feel what Japanese culture is like. You can see this displayed through the aesthetics of the store and how it feels like you are eating at a fine dining restaurant. He said he doesn’t want to make many locations of UZU, only about 10. He is not fully vegan himself, but he believes a vegan diet helps to live a healthy lifestyle, but it also affects animals in a good way. The owner has been a chef for over 25 years and he just decided he wanted to make better choices for those of who will inhabit the Earth in the future hence he created UZU.

I just loved everything the owner was saying, especially after eating that delicious meal and having that traditional Japanese inspired experience. Everything he was saying just made perfect sense. I am totally rooting for UZU. As of right now times are a bit tough for all businesses due to Corona, but I believe UZU will pull through and be able to give a once in a lifetime experience to those who come to this amazing restaurant. Until next time class, have a Happy New Year and we will see you in the year 2021!