Kyoto boasts an impressive 1600 Buddhist temples and 400 Shinto shrines, but when you’re walking around and spot one, how can you tell which one it is?

It’s all in the name

On the surface, everything seems clear cut: temples are Buddhist and have the words, ‘terra/derra’, ‘ji’ or ‘in’ at the end of their names (For example, Kinkaku-ji and Kiyomizu-dera). Shrines on the other hand are from the Shinto religion that worships local Kami (spirits) and these places have ‘gongen’, ‘gū’, ‘jinja’, ‘jingū’, ‘mori’, ‘myōjin’, ‘sha’, ‘taisha’, ‘ubusuna’, or ‘yashiro’ at the end of their names (For example, Matsuo-Taisha, Kitano Tenman-gu). Easy right? Well, unfortunately not. Even ignoring some obvious difficulties with reading the names in Japanese Kanji, politically, the story is also a little bit more complicated.

Until 1868, the government promoted a policy of Shinbutsu-shūgō in Japan, which fused and jumbled up the native Japanese Shinto and the imported Buddhist religions. The Shinto Kami were promoted not as separate gods, but as Buddhist spirits come to Japan to save the people there. As a result of these beliefs, there were shrine-temples (jingū-ji) and temple-shrines (chinjusha), which combined features from both religions. Even after the Meiji Period’s shinbutsu bunri, which aggressively forced the separation of Buddhist temples and Shinto shrines, some mixing still occurred, for example while Kyoto’s Enryaku-Ji and Kiyomizu-dera are both temples, they each contain chinjusha, smaller Shinto shrines housed within Buddhist grounds. While temple-shrines were somewhat tolerated by the aggressive separation law, shrine-temples (jingū-ji) were not so fortunate and are rare nowadays. Kyoto’s Kamo Jingu-ji is one example but it is only a modern reconstruction.

So, if the names and religions don’t help that much, how else can we tell? Architecture can help us out a lot. Some characteristic buildings can show you whether the complex is principally a temple or a shrine. 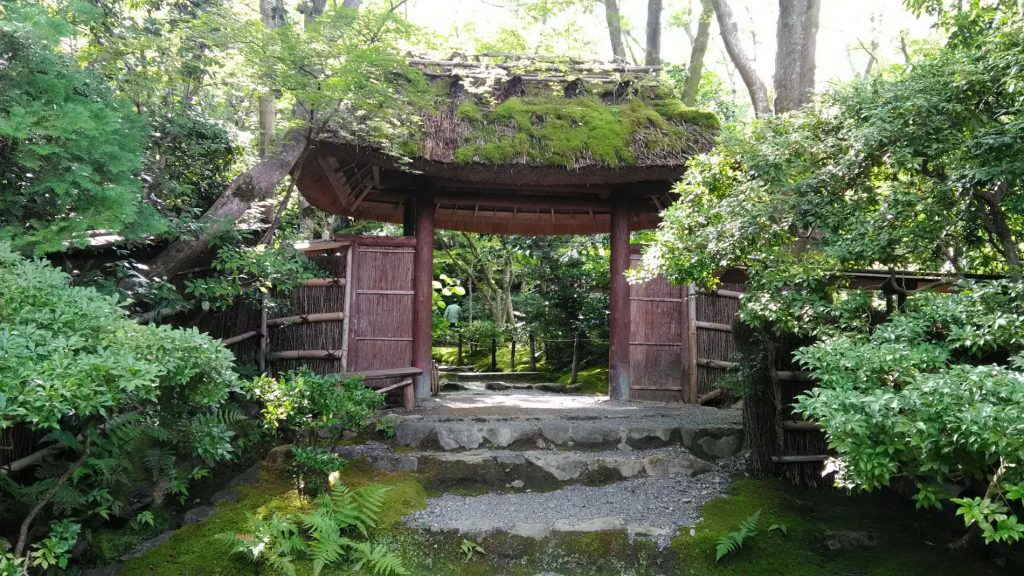 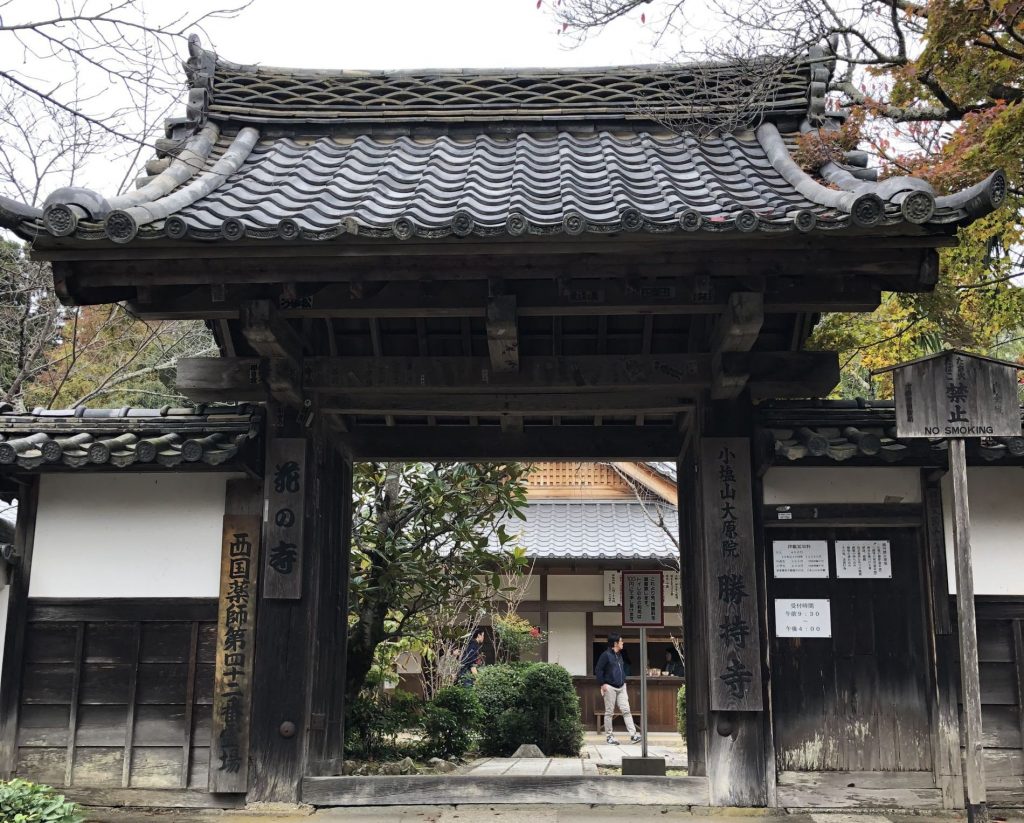 Starting at the complex’s main gate, the entrance way can give you a pretty good indication of the religion. Buddhist temple gates are called mon. They are usually large covered gateways in the walls, and can be quite simple or elaborate depending on the temple. The roof of the gateway will be gently sloping, just like the other temple building’s rooves. Buddhist gateways may also be flanked by two large humanoid Nio statues that act as guardians for the pacifist buddhists. 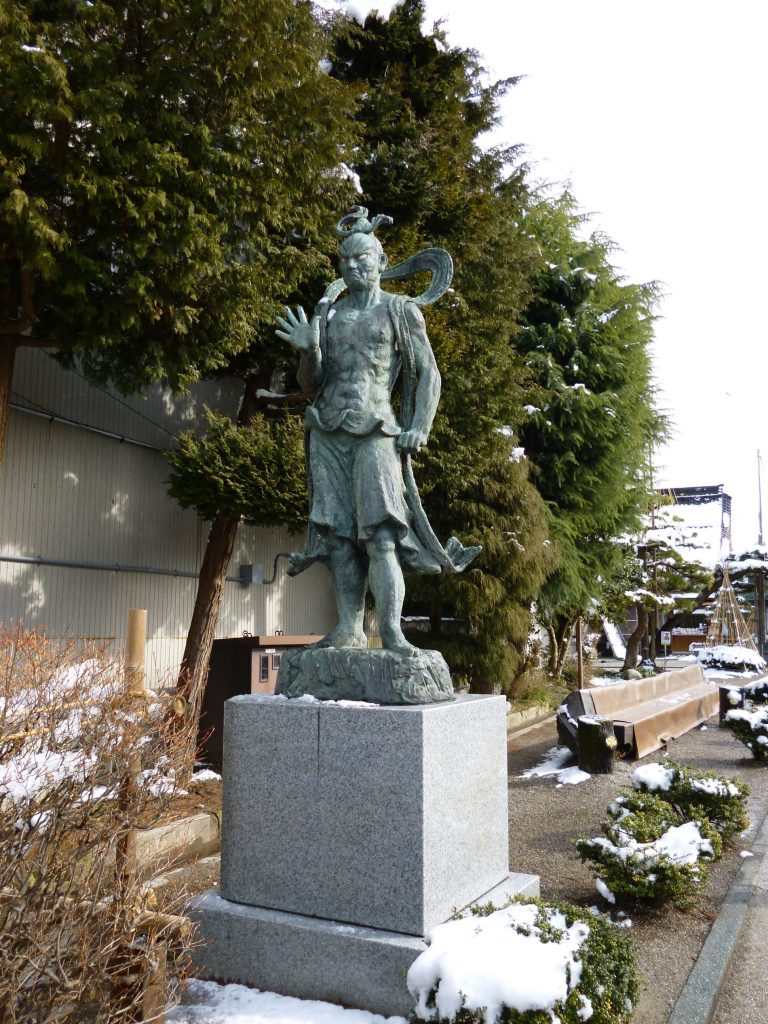 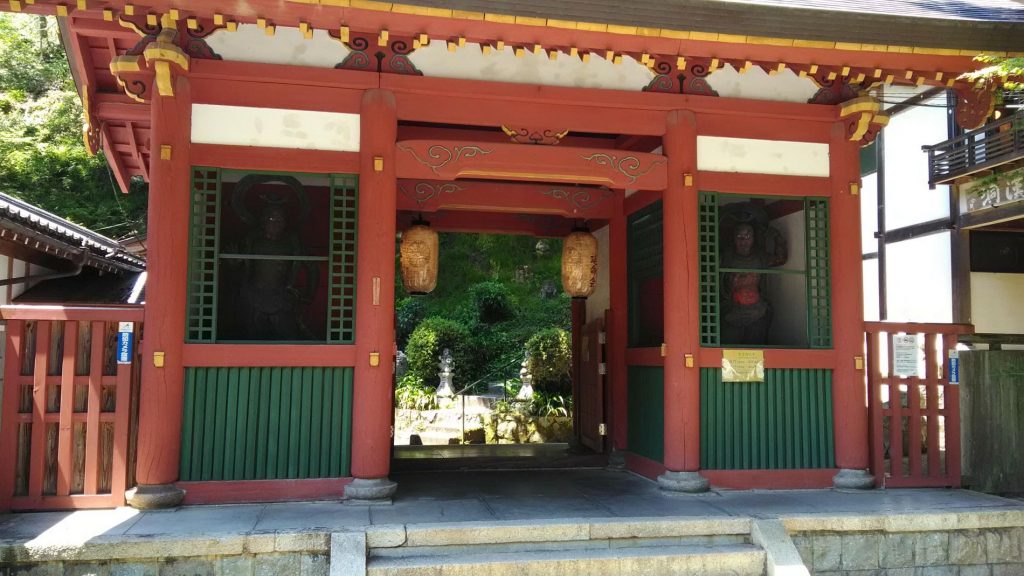 A Nio statue and another mon at Otagi Nenbutsu-ji with two statues flanking the gate.

The figures are named Misshaku Kongō and Naraen Kongō, and the shape of their mouths is a symbol of wider buddhist beliefs. One statue has their mouth open, as if saying ‘a’, the first sound in Sanskrit, while the other has their mouth closed as if saying ‘un’, the final sound of Sanskrit. The sounds represent the beginning and the end of all things, or creation as a whole. (similar to Christianity’s alpha and omega.)

Shinto gates on the other hand are much simpler than Buddhist mon. Called Torii, they are made with two posts and a lintel, though more complicated variations do exist, and are free standing rather than part of a wall or fence. They are often made of wood, but metal and concrete torii are also common. They are also often painted red and black. The purpose of the torii is not for defense, but to symbolise the transition into a more sacred world. 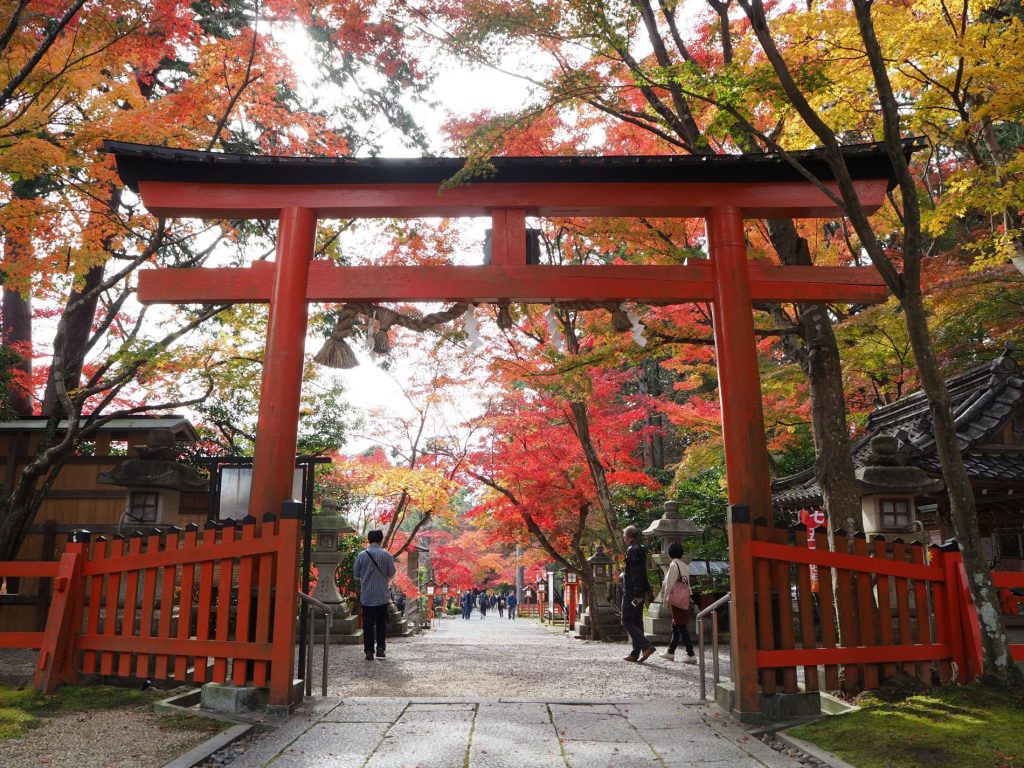 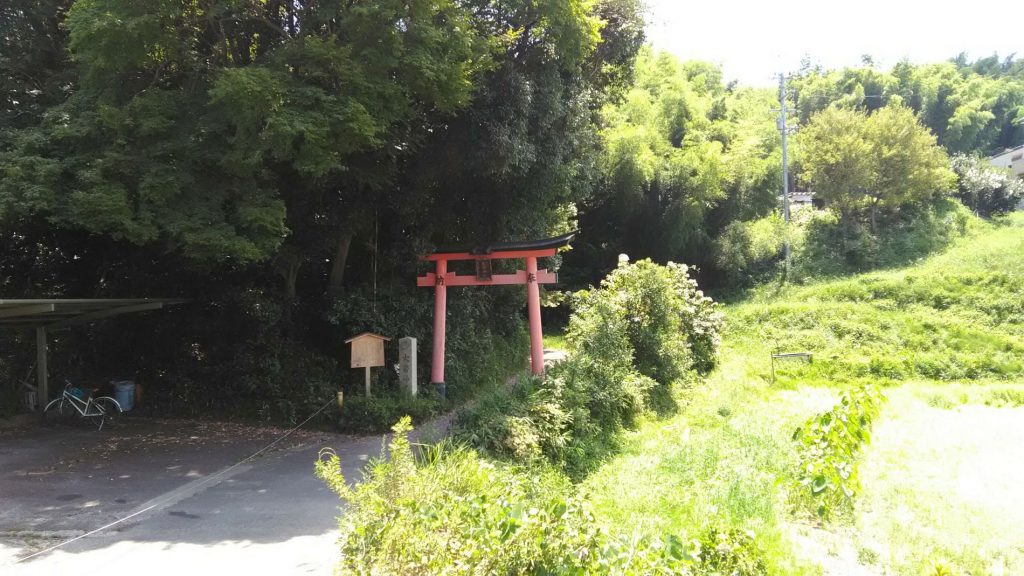 Moving inside the complexes, the main feature of Buddhist temples is the Butsuden, the main hall. Because Buddhism was imported to Japan from Asia over a long period of time, there is no single style of Butsuden, but rather a mix of styles can be found across Japan. Despite this, the overall appearance of the hall will still be recognisable. It will always be made of wood, and other natural materials such as thatch. Stone will only be used for some foundations in special circumstances. Metal nails will also be absent, with everything held together with a series of complicated wooden joints instead. The Butsuden roof will be high and gently sloping, covering much more than the rooms below. The surrounding walkways or balconies will also be covered, limiting natural light but also seeming to blur the boundaries between the inside and outside worlds, thus representing the Buddhist philosophy of oneness and harmony. Similarly following the Buddhist philosophy, dimensions of Butsuden are often universal, being 3×3 or rarely 5×5 ken measurements. Within this building will be housed the temple’s buddha statue or statues. 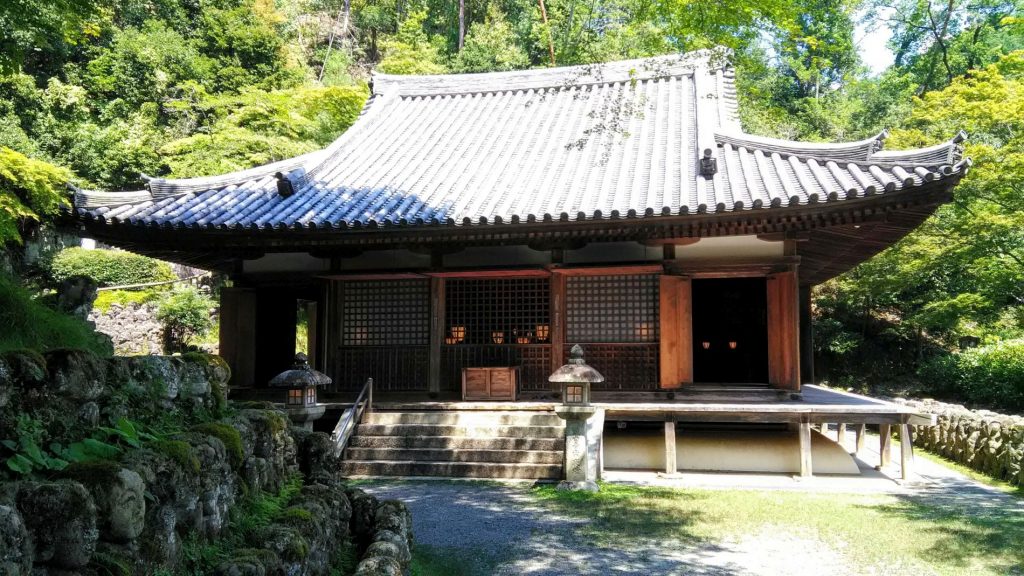 Butsuden with its characteristic roof blurring the inside and outside worlds.

As for shinto, while its origins in Japan predates Buddhism by about 1000 years, the practice of constructing permanent buildings was actually something borrowed from Buddhism after it arrived in Japan. Before buildings were built, sacred natural areas were simply fenced off and sometimes marked with torii. The buildings within a Shinto shrine can vary wildly unlike the more orderly and proportioned Buddhist temples. Though not always present, the hondo is the equivalent of a Butsuden and can house the local Kami. They were inspired by Buddhist architecture, so butsuden and hondo are very similar in appearance and construction materials. The roof of the honden can sometimes give a clear indication as to whether you are looking at a shrine or a temple though, as uma will stick out from the top of the roof. These decorations are used exclusively in Shinto architecture, but then again do not have to be present. 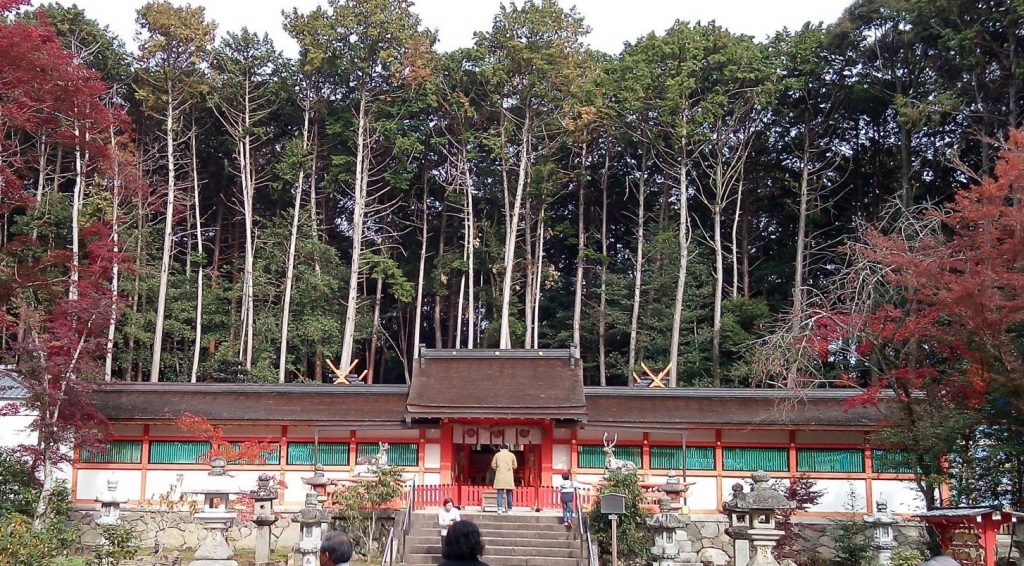 The golden uma can be seen on either side of the building, a sure sign that we’re in a shinto shrine!

To sum up, there are a few ifs and buts and maybes regarding whether a building is a temple or a shrine due to Japan’s old political and religious policies, but these main points should help you find the answer:

– Have Butsuden with gently sloping rooves.

– Have honden whose rooves may have uma on top.