(Class bell rings) Class, it has been great up to this point traveling around Kyoto on these Vegan discoveries to deliver to you guys the scoop on the delicious food establishments held within this historical city. Today’s adventure was very different than the others. Currently, all over the world we are being affected by the Corona virus. The streets of Kyoto are nearly empty, many shops are shutdown, and many people are worried about the progression of the Corona virus. Even though the circumstances seem like things are turning for the worst, we are all becoming more aware of life’s obstacles, and this will allow us to improve our lives. Therefore we must continue to move forward in life, not to run away from the problems, but to accept the present and work on a solution at this time. We are all struggling in our own way, so we must all continue to move forward. With that being said, I will be continuing to bring you guys the juicy, tasty info on the vegan restaurants of Kyoto. So class let’s settle down and let’s get into the discovery of Sunny Place!

I have to first start off this discovery with the owner of the restaurant, Yumi. Before I came to the store, I called Yumi to make sure it was ok for me to come to the store and ask her some questions. Because of Corona virus we had some difficulty setting up a time for me to come by, but our conversations over the phone really showed me what type of person she was. Even though she didn’t know who I was, she was very open to making this interview happen. Especially at these troubling times, she was committed to helping me out, which also in the long run helps you guys out.

When the day finally came where we were able to meet, I was very excited to meet Yumi in person. She surpassed the expectations I had initially set from our phone conversations.

When I got to Sunny Place, it seemed like a typical Japanese house, but the energy was much different on the inside. 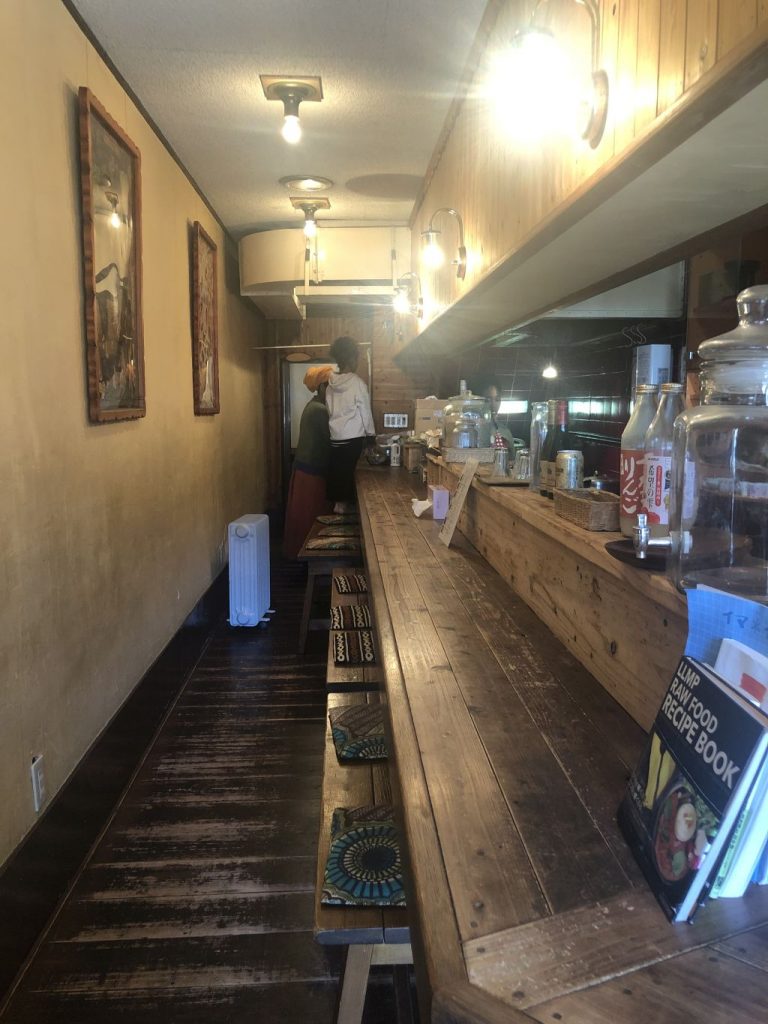 Now a lot of vegan restaurants usually have a nice wooden finish to their furniture, but this time I’m not talking about the energy in terms of how the furniture looked or the selection of furniture. It was the energy of Yumi and her staff. As soon as I walked in and I was greeted by them both, I could really feel the good intentions they expressed through their words. The restaurant had the wooden interior and it wasn’t meant to fit a lot people in there so it really gave off this homey and cozy feeling. Then you add the energy of Yumi and the staff, and it just felt great to be there. Talking to Yumi for a bit, I find out she is one of the most interesting people I have met in Japan. A bit of information on Yumi, she loves to travel and when she was younger, she lived in many different places, but mainly New York. (Where I am from!) In New York she fostered a love for reggae culture and this lead her to take trips to Jamaica. Feeling very connected to the culture, she became Rastafarian. By the way she is Japanese, and she can speak English very well if you were wondering! When she was living in New York, her mother came and visited her. During her mother’s stay, Yumi introduced her to vegan food, then her mom decided to come back to Japan and start the restaurant we are learning about today. This was many years back; Yumi believes Sunny Place was the first vegan restaurant in Kyoto!

Getting ready to order my food, I notice this beautiful young girl sitting by herself getting fed by the other staff member; I had to ask Yumi, “Is this your daughter?” She replied, “Yes I have 8 children.” You should have seen the look on my face! I was surprised and another mind-blowing fact was the staff member serving the young girl was also her daughter! It was so interesting to talk to them because Yumi being a Rastafarian, they do not eat meat, and she raised the children on the same diet. As many of you know, being vegan is not very easy as an adult especially in Japan, for the kids to eat a vegan diet while their friends are eating other foods, I knew it must have been very difficult to adjust to those circumstances. But at the end of the day, the daughter working behind the counter was very happy she continued through and ate a vegan diet. The younger daughter seemed she didn’t mind at all that she was eating different meals from her peers; she was a very happy and content little girl. After finding so much out about Yumi and her family, I was finally reminded what I came there for by the rumble of my stomach. Let’s get into what you guys really came for, the food! 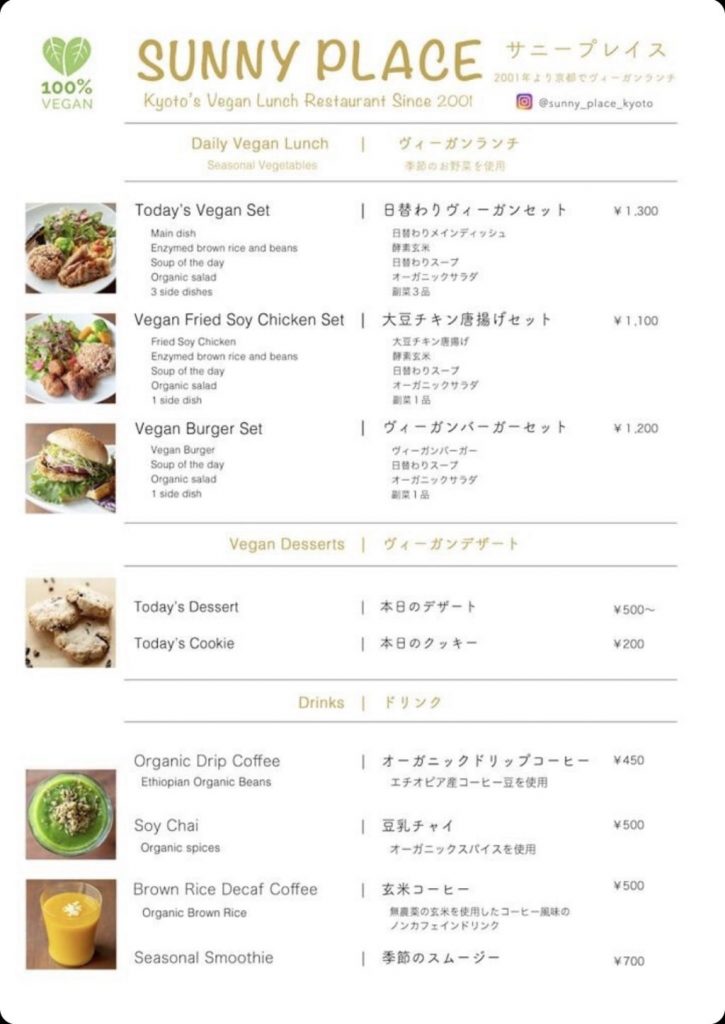 Here is the simple menu, which contains both English and Japanese. I asked Yumi what is the most popular item on the menu and she recommended the set meal of the day, so that’s what I decided to order.

ARE YOU READY TO SEE THE DELICIOUS FOOD I WAS SERVED?

HOLD ON TO YOUR SEATS, WE ARE GETTING READY FOR LIFT OFF! 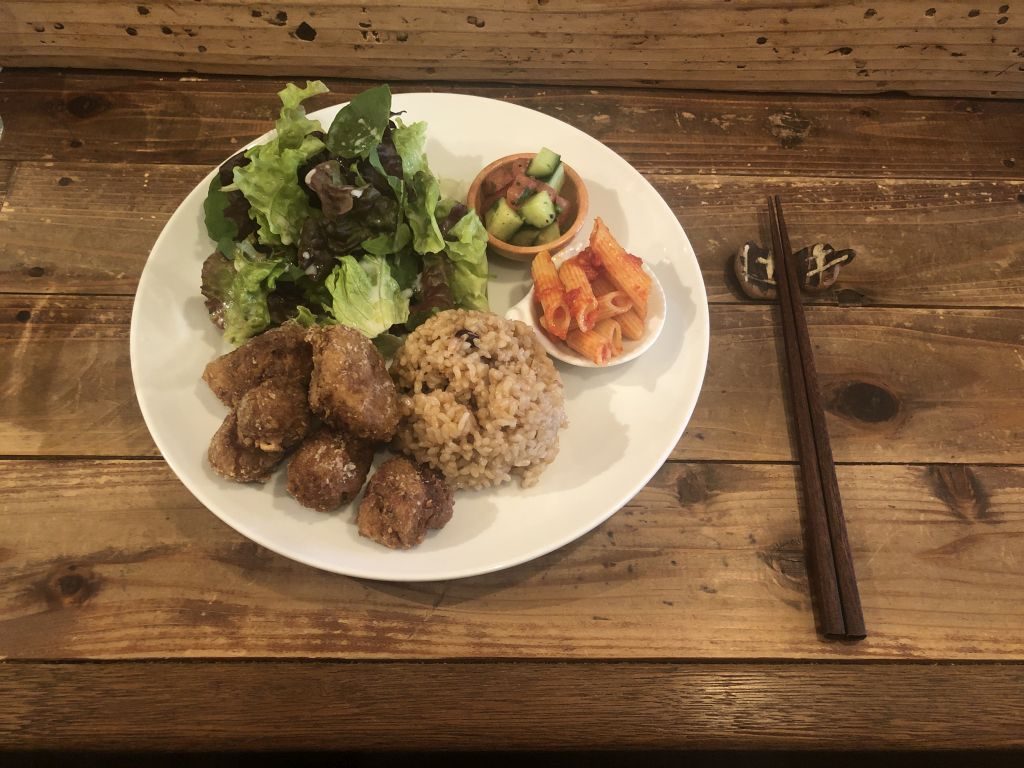 BOOM! You didn’t see that coming right? So the set meal included a tomato-based pasta, a fresh light cucumber and tomato seasoned salad, a garden salad, brown rice, miso soup, and my favorite item in the meal, the fried vegan soy meat. SOOO crunchy on the outside and fluffy on the inside. I am dreaming of the day I can go back there and eat them again! The various items on the menu were derived from different vegan recipes known to the vegan culture around the world. They are simple, light, with the quality of it really found in the taste. The vegetables are locally bought, and depending on what season it is, items on the menu will vary. Most of the customers that come to Sunny Place are foreigners who go to school at the university near by, but she has loyal Japanese customers as well. 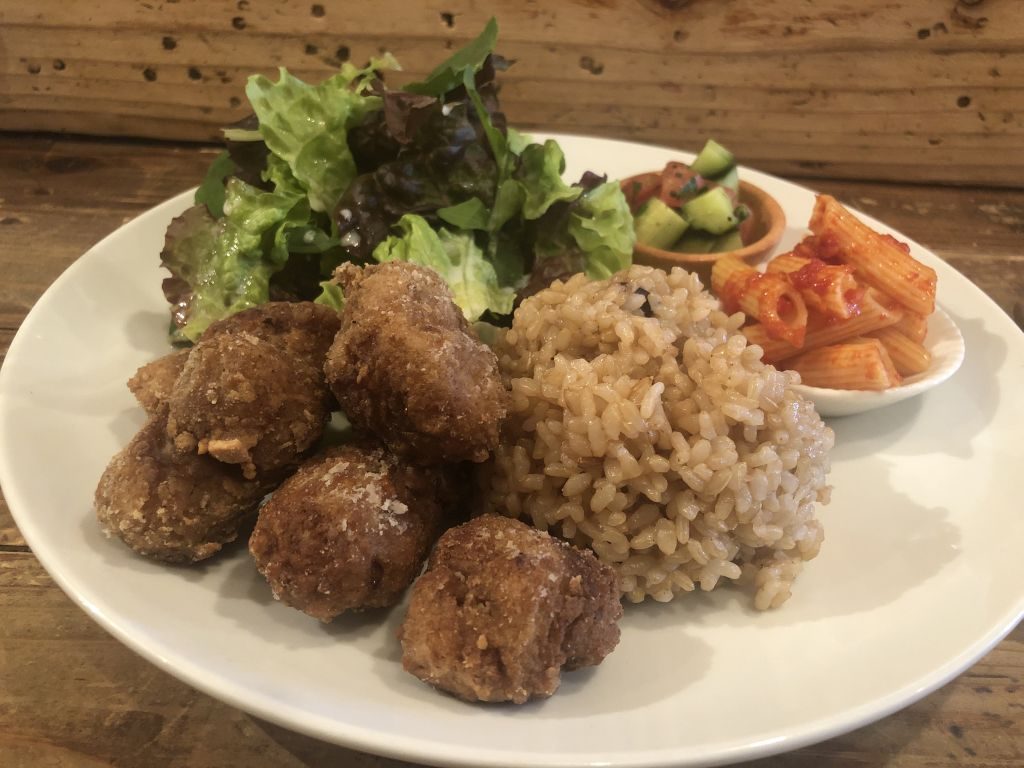 Just in case you missed looking at this delicious piece of art. Here’s another look! 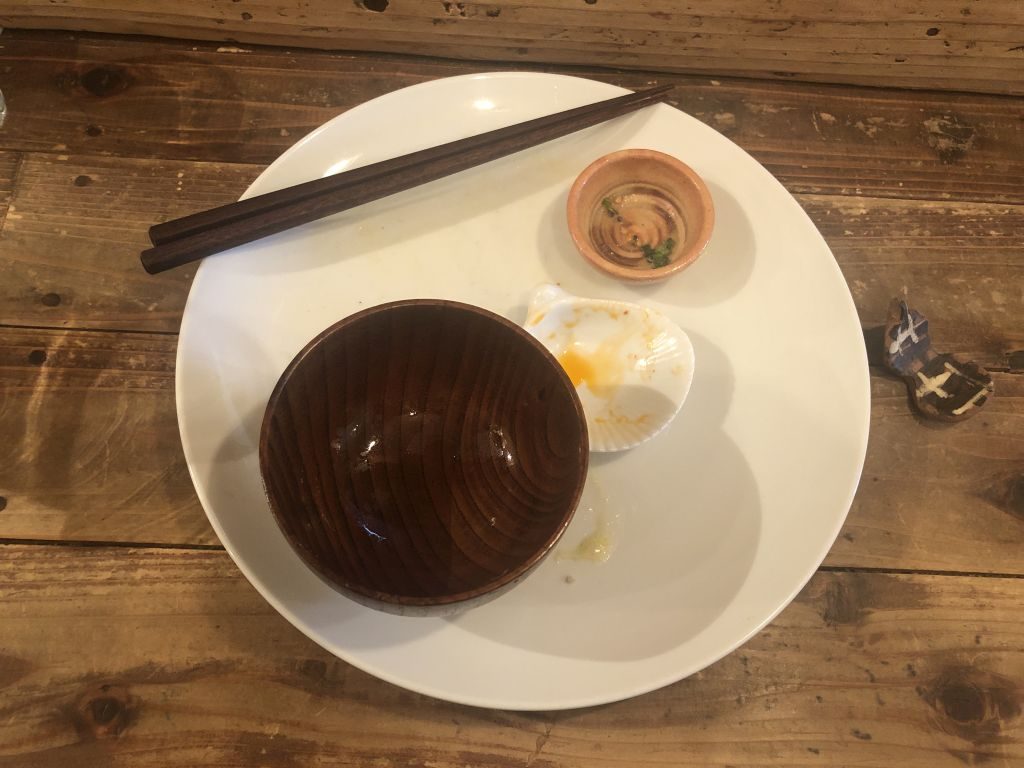 The meal was super filling, but my stomach did not have that full feeling. The great food, matched with the great people and the atmosphere, I was 110% satisfied by my experience at Sunny Place.

Especially in these troubling times, it is very hard to see the brighter side of things. When we are in fear we tend to think about ourselves, but these times right now are expressing to us we need each other more than ever. The human connection is what keeps all of us level headed and pushing forward. When I went to Sunny Place, I really felt a sense of connection with Yumi and her family. They were very caring in their actions and in their food. I left Sunny Place with much more confidence and love to take to my next experience of that day. I highly recommend you to visit this place of good vibes where you can talk to very interesting people who are looking to connect with others. I asked Yumi what was her plan for the next 5 years, and she said she would like to make a cookbook with different vegan recipes to sell internationally. A couple times a month, Yumi also has cooking classes as well for those looking to learn how to make delicious vegan dishes. In her free time she also does capoeira! She has a license to actually teach and goes to Brazil periodically to learn more. She is truly a giving person and I am glad I was able to meet such a great person under these circumstances we are in at the moment. 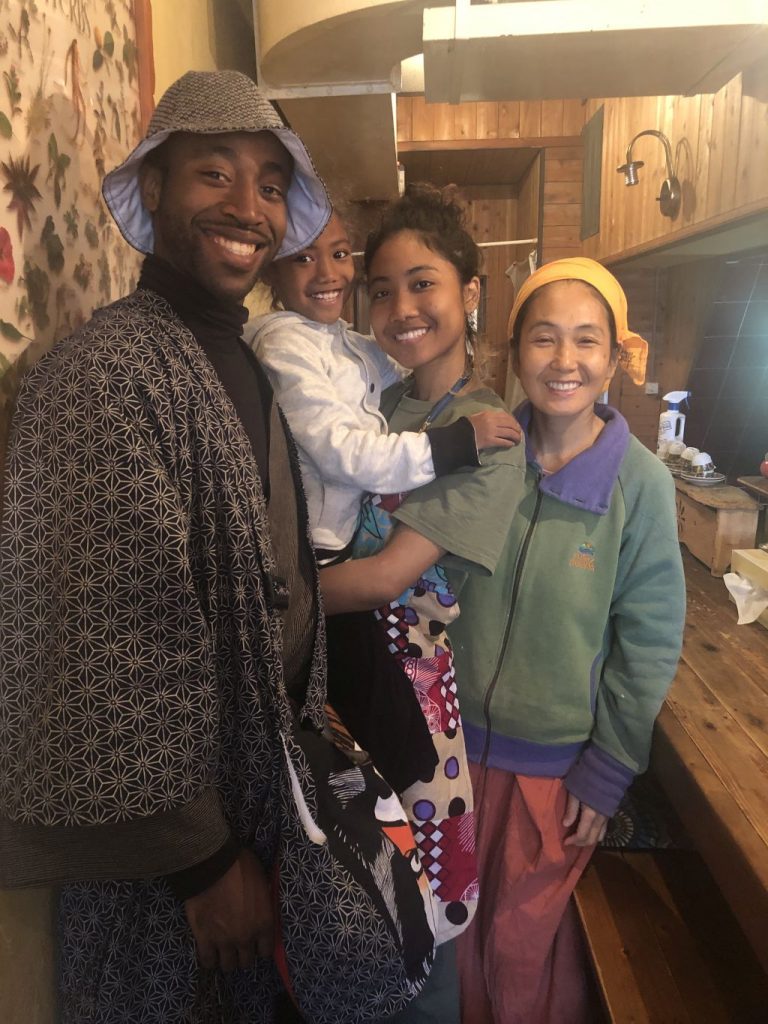 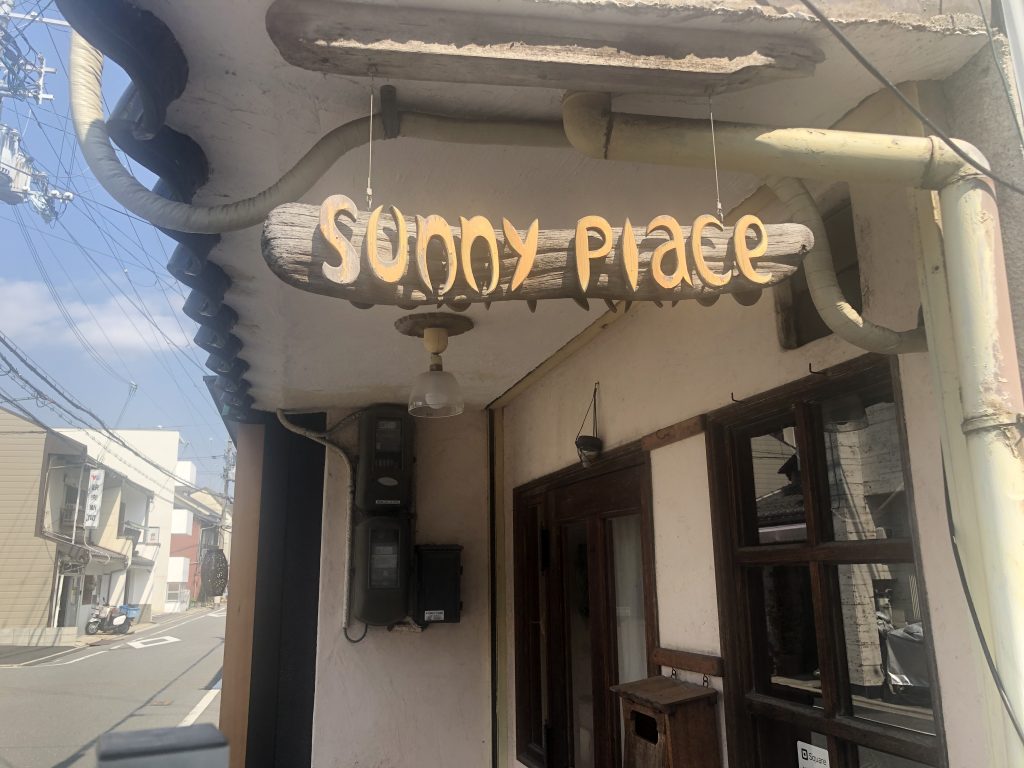