Otagi Nenbutsu-ji, a little known story of misfortune and love

There’s not much that can make me want to cycle up a mountain in the mercilessly humid 36°C heat of Kyoto’s summer, but Otagi Nenbutsu-ji stands out from Kyoto’s other 2000 plus temples and shrines. While not the most well known, it is one of the most beautiful, atmospheric, and unfortunately, one of the most frequently destroyed temples in the city, and comes with a fascinating history.

Otagi was first built in AD766, on Matsubara street in the Gion district, 12 kilometers away from its current location. At the start of the Heian period (794-1192) the temple was hit by the first of many misfortunes. The Kamo river, now calm and shallow yet historically wild and dangerous, burst its banks and destroyed the temple. Thankfully, a buddhist monk of the Tendai sect, Senkan Naigu (918-984) undertook its restoration under the patronage of Enryaku-ji, the headquarters of the Tendai sect in Japan.

Sadly, over the next 1000 years the temple gradually fell into disrepair and once again needed saving. In 1922, a decision was made to transfer the remains of the temple to its current location at the base of Mount Atago as part of a wider project to boost tourism. The move took three years and the main hall (本堂hondo) and main gate (門 mon) were moved piece by piece. While the out of the way position may seem strange now, at the time, there was a train line with a station very close to the temple. The Atagoyama railway was however shut down during the Second World War, leaving Otagi less accessible. Along with its isolation, the 1950’s also brought more misfortune, when a powerful typhoon destroyed the recently reestablished temple.

Following this long line of misfortune, Otagi’s prospects were dramatically improved due to the efforts of one man, Kocho Nishimura (1915-2003). An artist and sculptor turned buddhist monk, Kocho was drawn to the temple after having a dream while fighting in the war. He saw many destroyed buddha statues and vowed to repair them if and when he returned from the fighting. He survived the war and began to work on his promise, becoming the chief of Otagi Nenbutsu-ji in 1955. One of his most well known projects was the creation of 1,200 Rakan, hand carved statues of the followers of buddha, which were made over a ten year period from 1981-1991. Kocho invited ordinary people from across Japan and from around the world to take part. He encouraged everyone to fill each statue with their own experiences, passions and personality, resulting in a truly remarkable sight. A hillside covered with figures not only in prayer, but playing tennis, sharing time with their loved ones, and even listening to their Sony Walkman. 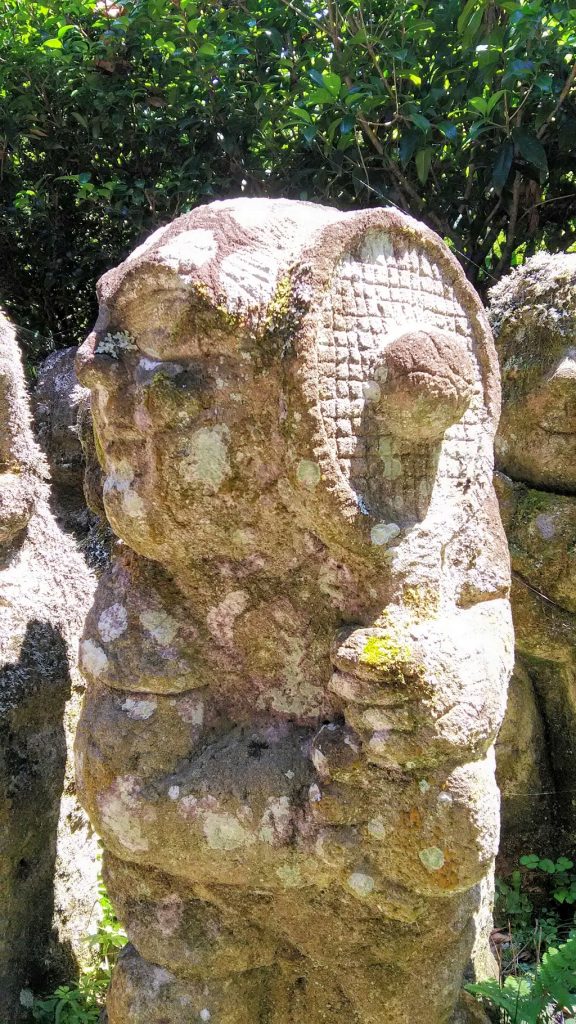 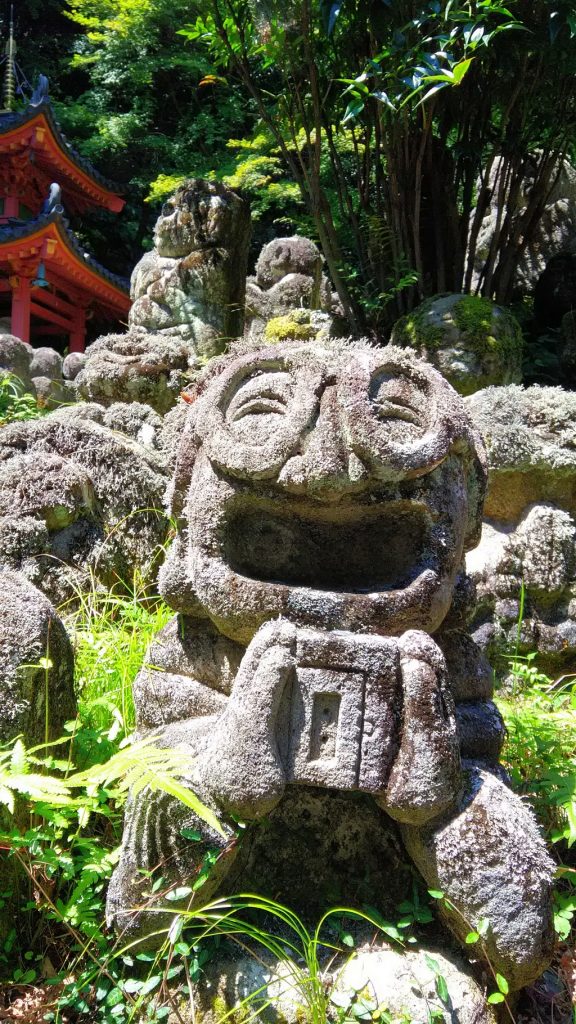 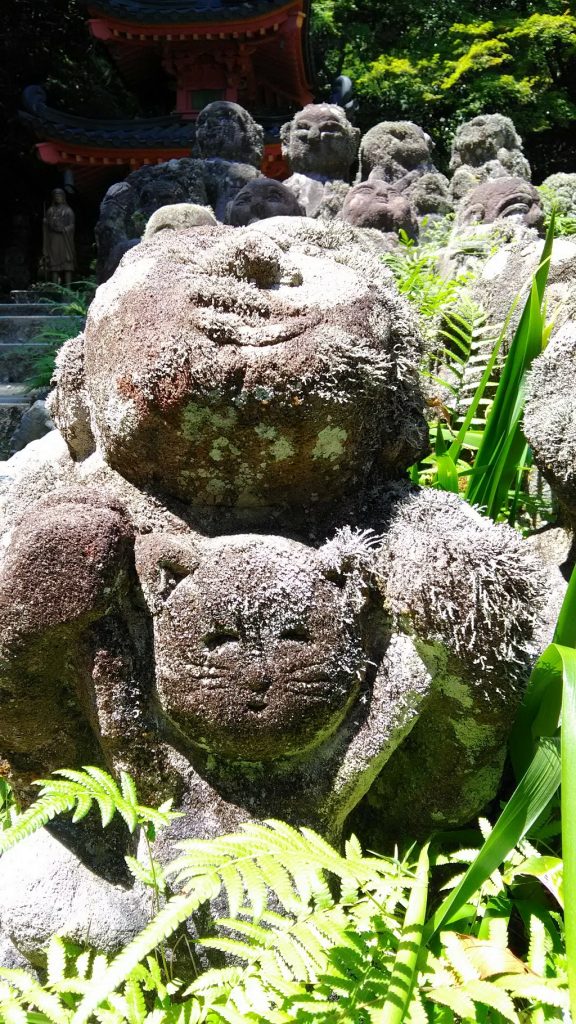 While the Rakan are Otagi’s main draw and most iconic feature, the other buildings in the temple’s small grounds each have their own fascinating stories to tell, with different architectural styles and homages to other temples in Kyoto.

The main hall (本堂 hondo), made of cypress wood and built in the Kamakura period style (1185–1333), has actually moved locations twice in its lifetime. Before moving from Higashiyama to its current home, it was transported from an unknown temple complex, the name and place of which have been lost to time. The hondo roof also tells a story and holds its own secrets. What can be seen is split into two parts: the taller naijin roof, representing space and the universe covers the area where the monks work and pray, while the lower gejin roof covers the area where worshippers congregate, resulting in a beautiful two tier sweeping wave. 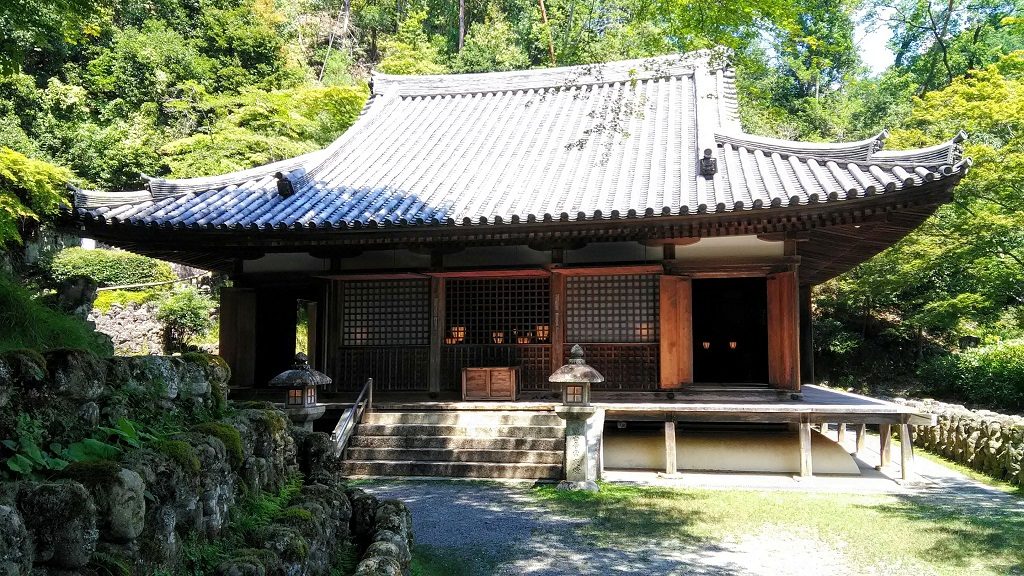 All is not what it seems though, as hidden under the naijin lies a second ‘secret’ roof. While impossible to see, the secret roof provides much needed protection (did I mention how many times this temple has been destroyed?) for the temple’s most sacred buddha images. Inside the hall, changing buddhist traditions can also be seen in the architecture. In the past, Otagi’s buddha statues were located much further forward on a stage, however, changes to the Houyou, the buddhist memorial service, required the monks to walk around and chant more. To make space, the statues were moved to their current somewhat harder to see location.

Otagi’s second hall, the jizoudou, built in the Taisho era (1912-1926), may seem like an ordinary modern copy of a Kamakura period temple, but viewed from certain angles, the observant may notice something quite interesting. Deliberately built on the edge of the hillside, the jizoudou, is an homage to Kyoto’s well known Kiyomizu-dera. The reason for this, as with much else in Otagi, lies with Kocho Nishimura. Not only did he help restore Kiyomizu-dera, but his teacher was also Kiyomizu’s chief monk, who helped Kocho find ways to generate income for Otagi’s preservation. 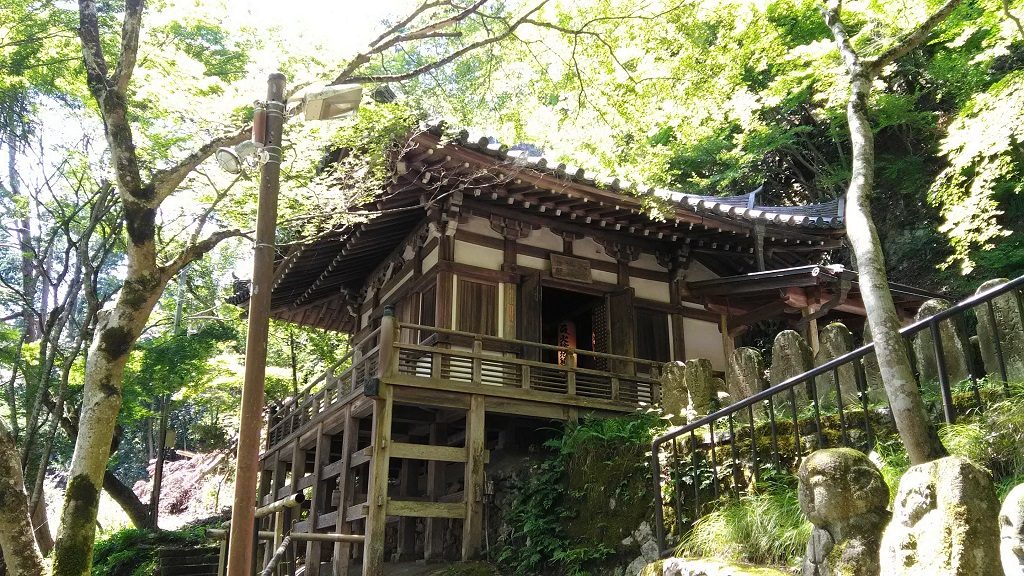 While walking through this small and quiet temple, the peaceful atmosphere and friendly faces of the Rakan immediately welcome you, and it’s easy to be inspired and awed by the creativity all around. Three generations in, the Nishimura family continue to look after Otagi and fill it with their art, music and love.

I can’t thank Koei and Koshin Nishimura enough for their time and help in debunking some incorrect net research and for sharing some great stories from Otagi’s history. If you find yourself in Arashiyama, definitely pay a visit to Otagi Nenbutsu-ji, it’s an unforgettable place. While you can cycle there, an easier option would be by bus. From the Nonomiya bus stop on the main Arashiyama street, take bus number 94 headed for Kiyotaki and get off at Atago Tera Mae, just outside the temple. A taxi costs about 1000 yen from the same bus stop, so is a better option for groups of 5 or more.