Nagare-bashi: Japanese Spirit in a Bridge

For over a thousand years, from within and without, Japanese people have been referred to as resilient, indomitable and hard working. Whether or not you want to label an entire nation as being the same, there does appear to be some truth in these words for a lot of the population.

Japan is constantly barraged with tremors, earthquakes, volcanic eruptions, heavy rains and strong winds, but the country always picks itself back up again and rebuilds, sometimes from scratch. It can be seen in daily life as well, where long working hours and overtime are the norm, even if it is disliked.

Another interesting feature of Japanese society is the apparent ‘technological paradox’ that exists here. While Japan boasts some of the world’s biggest household tech companies, such as Sony, Panasonic, Nintendo, Hitachi, Fujitsu, etc, low tech options are still abundant. Fax machines still dominate offices, flip phones are more than common and online video calls such as Zoom are only just starting to take off. This paradox possibly stems from people traditionally preferring to do things by hand – think Japanese job applications and CV’s, that are always painstakingly handwritten. (Applying for 5 different jobs? That’ll be 5 handwritten resumes please!)

So, what does resilience and low tech have to do with a bridge? Well, south of Kyoto City, In Yawata City, lies a bridge that can perfectly represent these features of Japanese society.

Kozuya Bridge, often referred to as Nagare-bashi (Nagare Bridge), or ’The Flowing bridge’ is a celebration of resilience and low tech solutions to big problems. 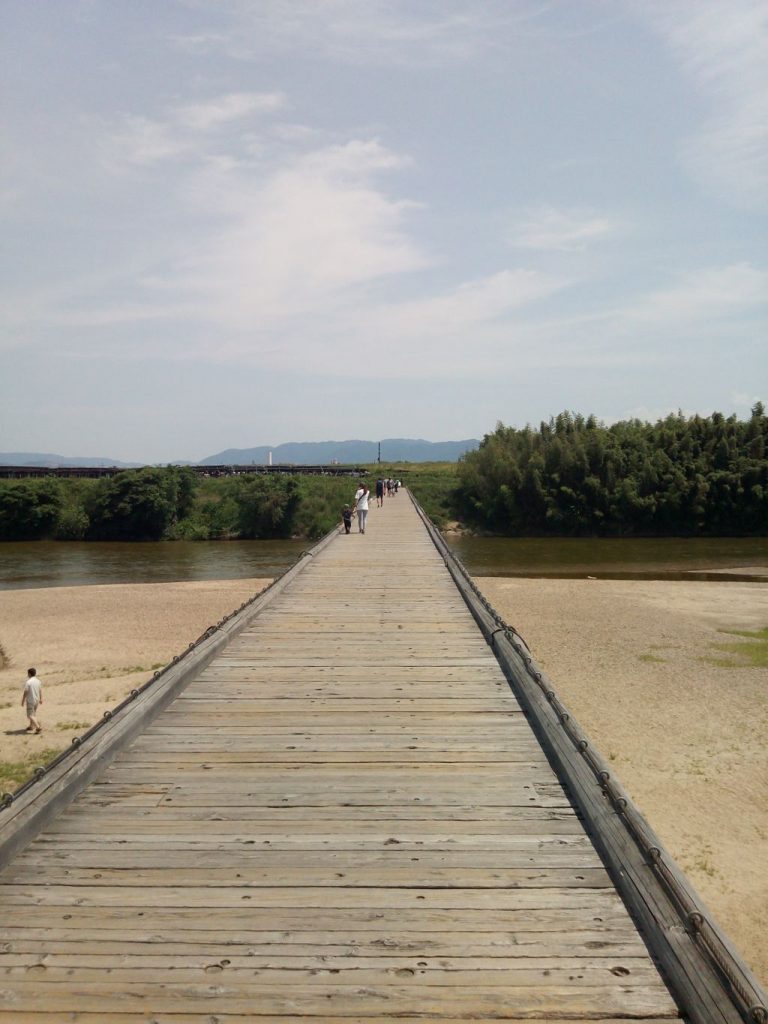 There are no handrails, be careful!

Made of wood, it spans the Kizu river, and with a length of more than 356m, it is one of the longest wooden bridges in the country. Originally, the river was crossed here using ferries, but when this became impractical, a bridge was decided upon. However, the wide river floods regularly, which made a standard bridge almost financially impossible to construct and maintain at the time in 1951. To overcome this, the ingenious and reusable ‘floating bridge’ was constructed.

It was predominantly constructed of Kitayama Cedar wood and is made up of eight wooden sections (each 40-50 metres long), each of which is chained to the bridge girders. When the river floods and the water level rises, each section can independently rise up and float on top of the raging waters. Thick metal cables stop each piece from washing away. When the water levels go back down to normal, the bridge sections can be put back into place, and foot traffic can recommence with minimal time delays. Hopefully. 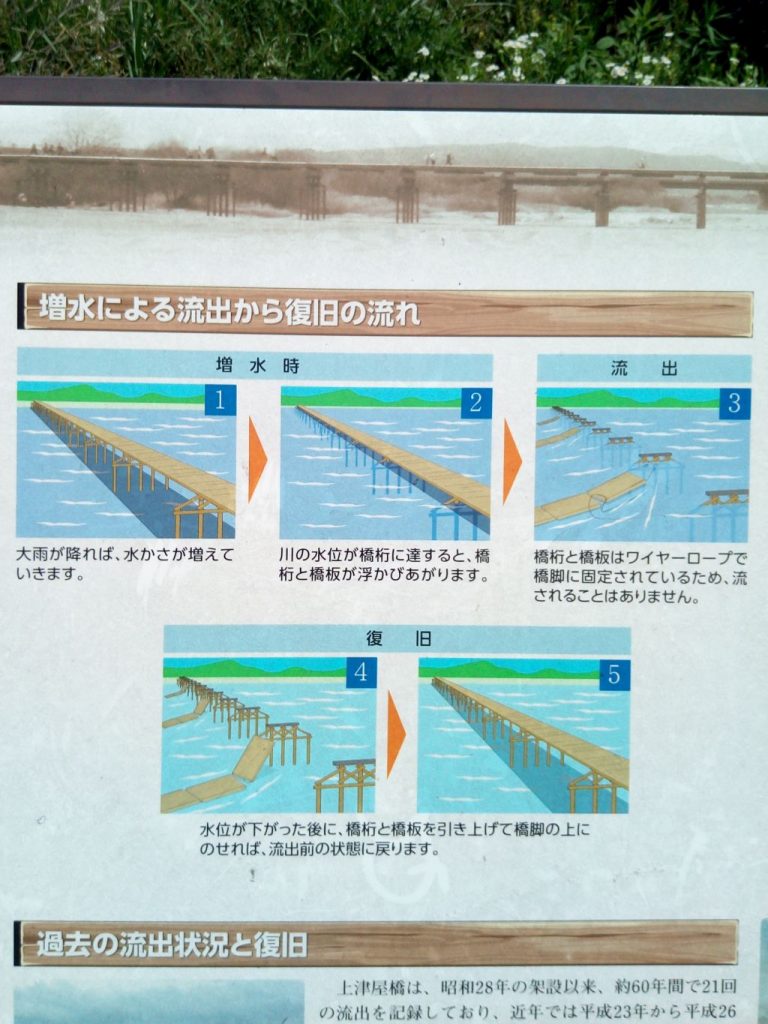 A sign at the site showing how the bridge works

Unfortunately, during numerous heavy floods, the damage to the floating bridge was extensive, and a quick repositioning of the bridge sections was impossible. Instead, large scale reconstruction work was carried out, sometimes costing more than 50 million yen to complete. So much for a cheap option! As the local government increasingly saw the bridge as helping moreny float away down the river, its future looked uncertain. In 2014, a committee was created to look into the viability of the bridge. It was originally proposed that seeing as a new modern road bridge had been completed in 1994, foot traffic could be diverted there (a mere 500 metres downstream) and the Nagare-bashi could be dismantled permanently.

However, more than 12,000 local residents signed a petition requesting to maintain the bridge for cultural and financial reasons. The bridge is a big tourist attraction for the city, and without it, Yawata City’s economy would suffer. Later in 2014, it was agreed that the bridge should be preserved, and in order to do this a massive reconstruction and preservation project was begun. The whole bridge was raised by almost 75 centimeters, which was supposed to minimise the damage caused during high waters.

During dry months, the river runs very low and it is hard to imagine the destructive power of the Kizu River in flood. The floodplain is huge, and many people use it as a park, picnic spot or as a walking route whenever possible. Many historical dramas are also filmed on and around the bridge, due to the stunning scenery, rustic charm, and lack of electricity pylons in the area. 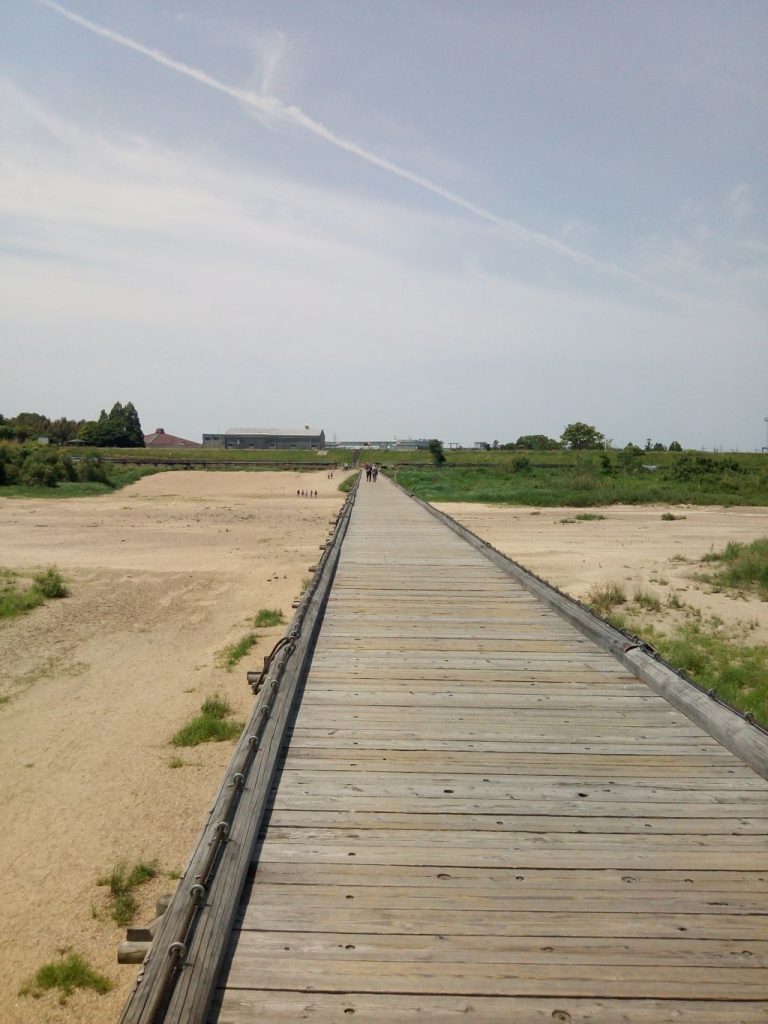 As a bonus, the area around the river is also a tea plantation, where some of Kyoto’s famous blends such as Shokado and Hamanokaze can be seen growing up close and personal. Tea in this area is predominantly used for tencha (a kind of green tea where the leaves are steamed and dried but not rolled) and is known by locals as ‘shore tea’ (hamacha), due to it growing in such close proximity to the river and its sandy floodplain. 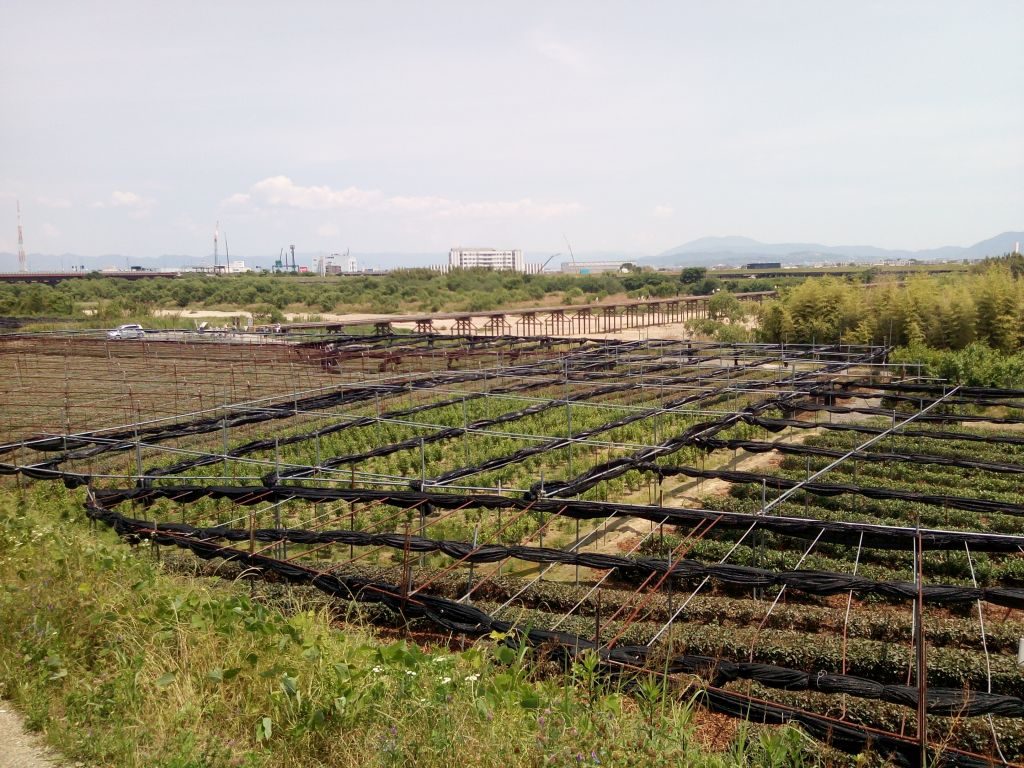 Tea and the bridge

If you feel like getting out of Kyoto City for a while, the Nagare-bashi is a great destination. It is best accessed from the main cycling path from Kyoto to Osaka, making it a nice day trip option for active explorers. It’s quirky, yet practical and, for a bridge, represents Japanese spirit very nicely.