Kyo Shibori or Kyoto style dyeing is composed of traditional dyeing techniques used to create a mesmerizing array of colours, designs and patters used on silk, cotton and various other materials to produce anything from elegant kimono to casual scarves. Today, we interview Kyo Shibori Expert-Ryo Shimata from Kyoto Shibori Museum.

What was your first experience with Kyo Shibori?

Speaking with Ryo, he recalls a memory of his mother wearing a shibori kimono Kyoto style dyed kimono when he was a child, probably making this his first contact with Kyo shibori.

Can you tell us a little bit about your background?

“I was born and raised in Kyoto. After high school, I went to New Zealand to learn English for one year and returned to Japan. However, instead of Kyoto I wanted to try and live in Tokyo and get to know more about Japan. I lived there for 4 years, but wanted to go abroad again. This time I chose Australia where I lived for two years. Then I traveled Southeast Asia for a few months.” Returning to Japan, Ryo chose to follow a more traditional path. He was introduced to the Kyoto Shibori Museum by a job centre.

Ryo has worked at the Kyoto Shibori Museum for the past eight years, learning the business from the bottom up, all of the step-by-step processes involved in the delicate, yet arduous work of shibori dyeing production from the artisans side, plus the business side.

Can you tell us a little about the origin and history of Kyo Shibori? 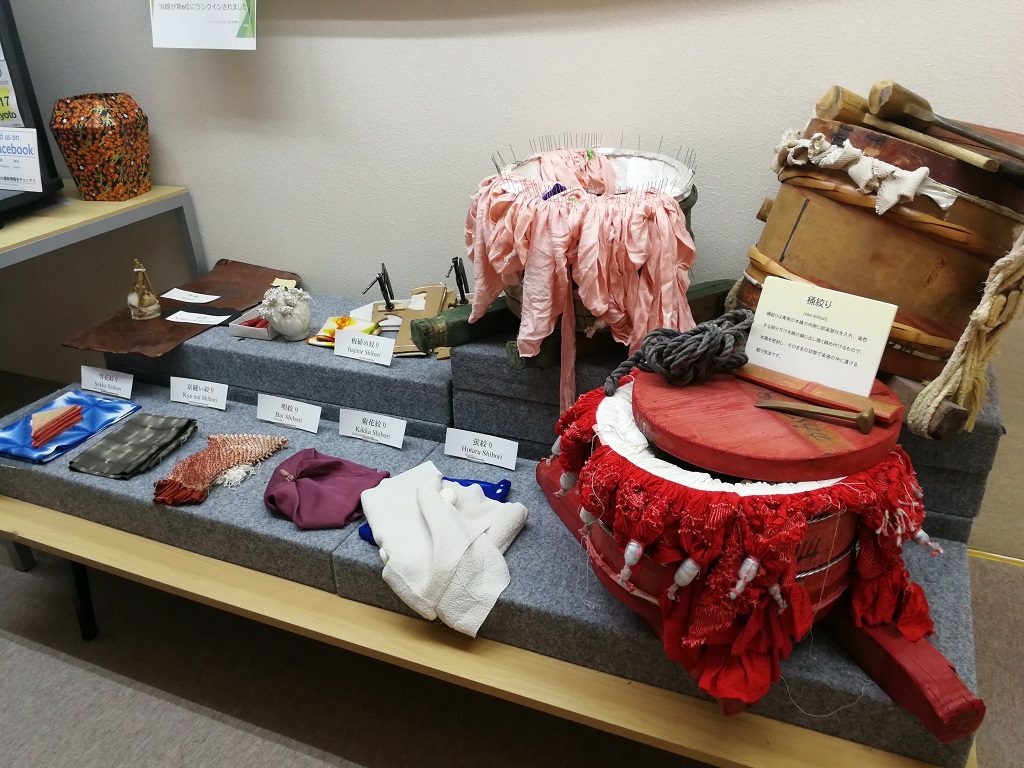 Reading some books on the subject and information he picked up from the Yoshioka family, Ryo shares a little of the origin and history of Kyo shibori. Ryo says, “Shibori dyeing originates from India and basically it seems to have followed the Silk Road to China, eventually arriving to Japan sometime in the 8th century. It started off as very simple and the patterns were not as intricate as today.”

That’s quite a long history and what an incredible journey shibori must have taken along the Silk Road, all the way to Japan. Ryo goes on to say, “many of the intricate shibori dyeing techniques we have today were invented and developed during the Edo period (1600-1868). “ Just as Japan has done with so many other imported ideas-ramen, cars, Japanese artisans took it to a whole new level!

What do you find most interesting about Kyo Shibori?

An unexpected, yet amazing nugget of wisdom Ryo shares with me is something I’ve started to recognize in the traditional world of arts and crafts at large. It’s a revelation in a sense as it parallels the very nature of our lives. A feeling, everything in our lives is in constant change and creates a feeling of unpredictability.

Were any of your family members involved in traditional arts or crafts?

Though his parents didn’t work in the arts and crafts, his grand parents owned a small business where his grandfather steamed clothes and his grandmother was a seamstress and steamer. He fondly remembers the old-style steamer hanging on the wall, catching his eye every time he visited.

What do you find surprises non-Japanese clients when they try Kyo Shibori for the first time? 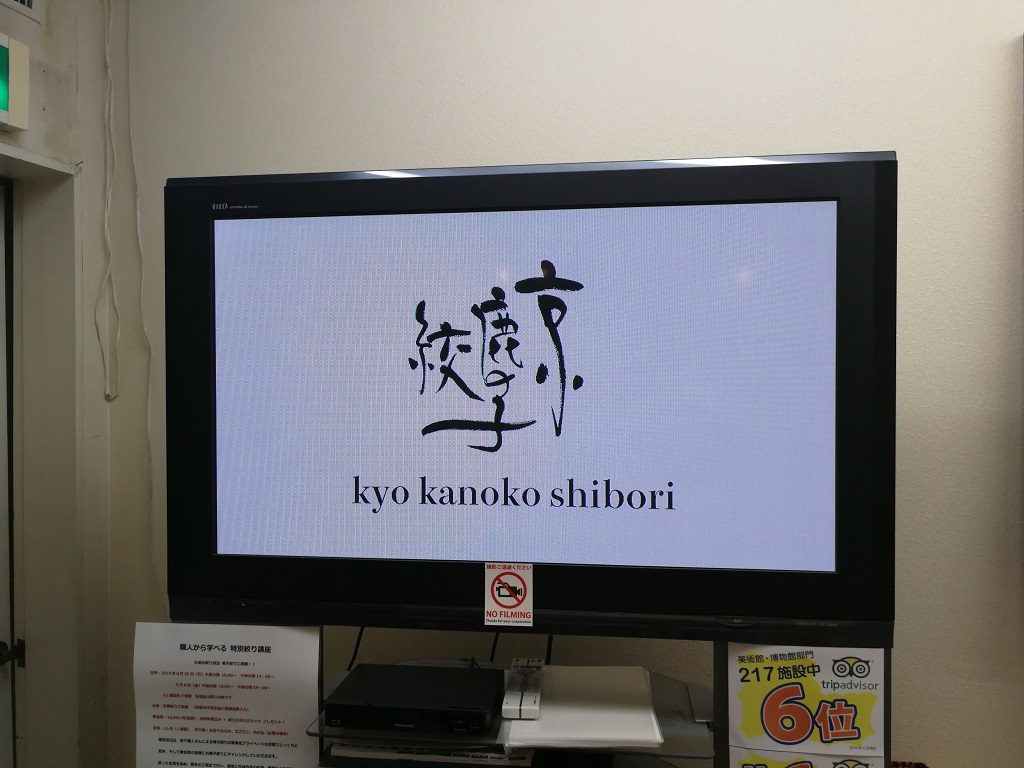 “We offer shibori dyeing classes using basic techniques to create your own scarf. Clients are happy about what they’ve created because it feels so easy, and yet they are able to create something functional and beautiful. The real interesting thing though is their reaction after watching the shibori dyeing DVD showing all the artisans and the intricate process involved in creating the professional pieces. There is an immediate change in their level of appreciation of Kyo shibori and I see this transformation a lot.” Where do you see the Kyo Shibori craft going in the future?

Ryo says some of the traditional techniques have already died out. However, a number of past clients who have taken classes at the museum brought the techniques home to their various countries and in some cases actually invented new techniques. People from Australia, Europe and America make up the majority of people interested in Kyo shibori techniques. Not as many people from Southeast Asia seem as interested. He thinks this has to do with the difference in dyeing techniques between the West and Asia in general. For example, Ryo makes reference to the tie dyed techniques many Americans immediately associate with dyeing. The techniques used in the West are totally different and blow people away!

Are you developing any new Kyo Shibori techniques? 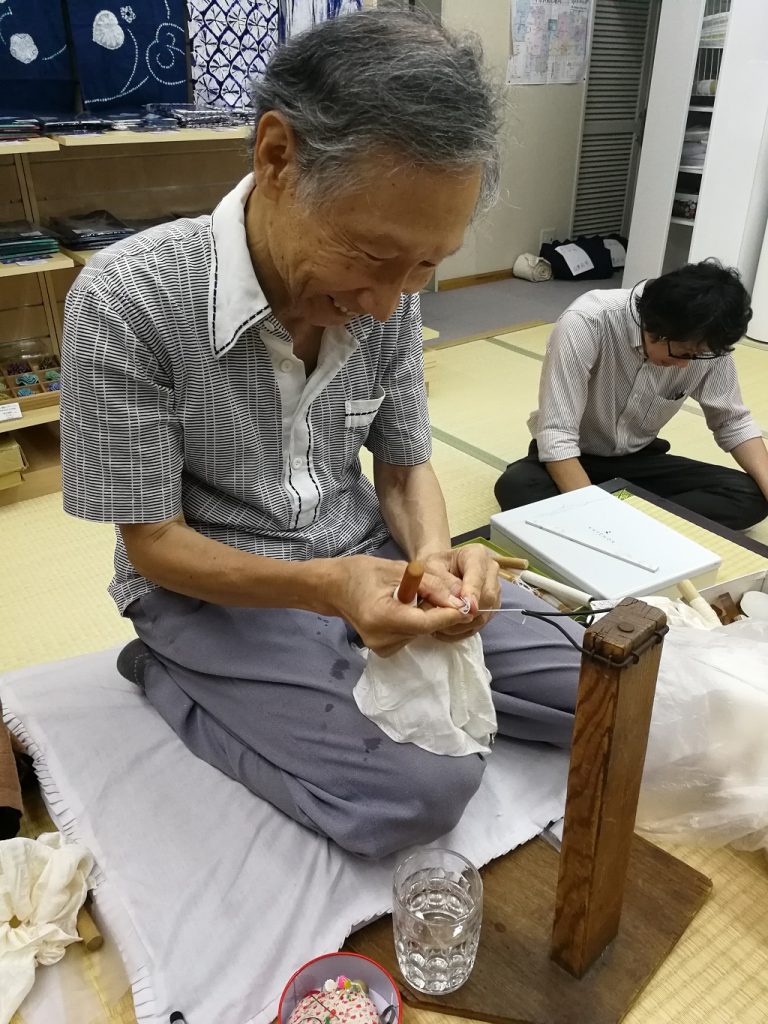 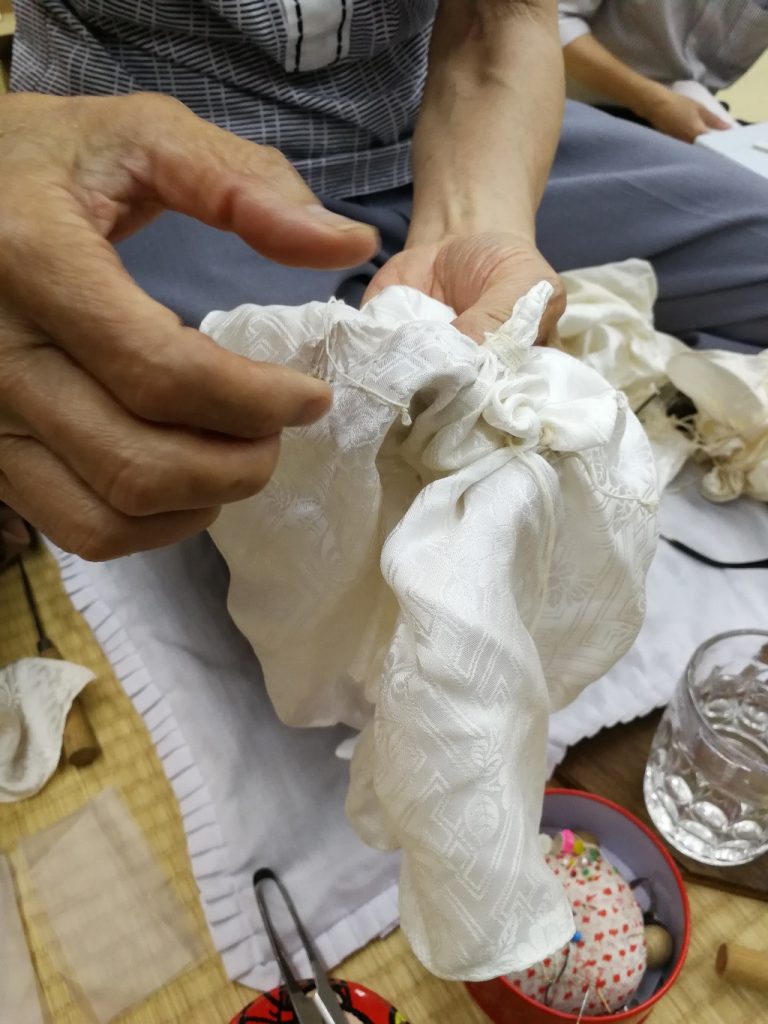 I lucked out here! Watching in person, the detail and intricacy at which these craftsmen are able to operate at is truly eye opening and like so many visitors before me, I now have a greater appreciation for Kyo shibori. 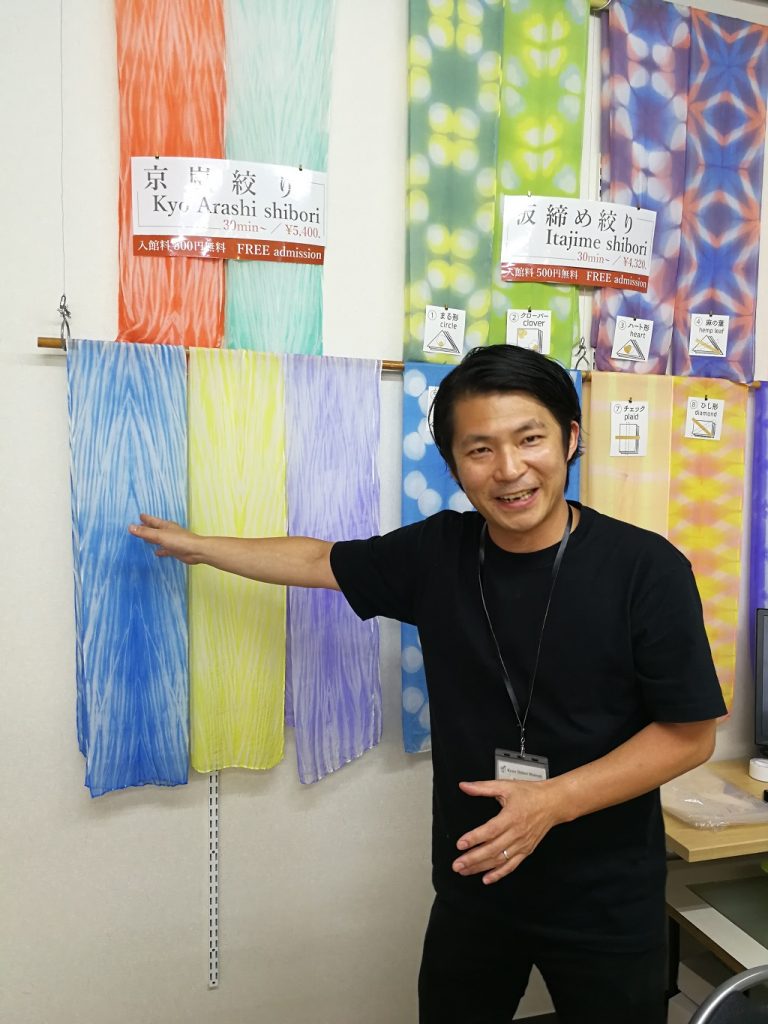 Ryo was kind to take time not only for the interview but he actually demonstrated one of their newly invented Kyo shibori techniques and allowed us to try and make a Kyo Arashi shibori scarf!!! 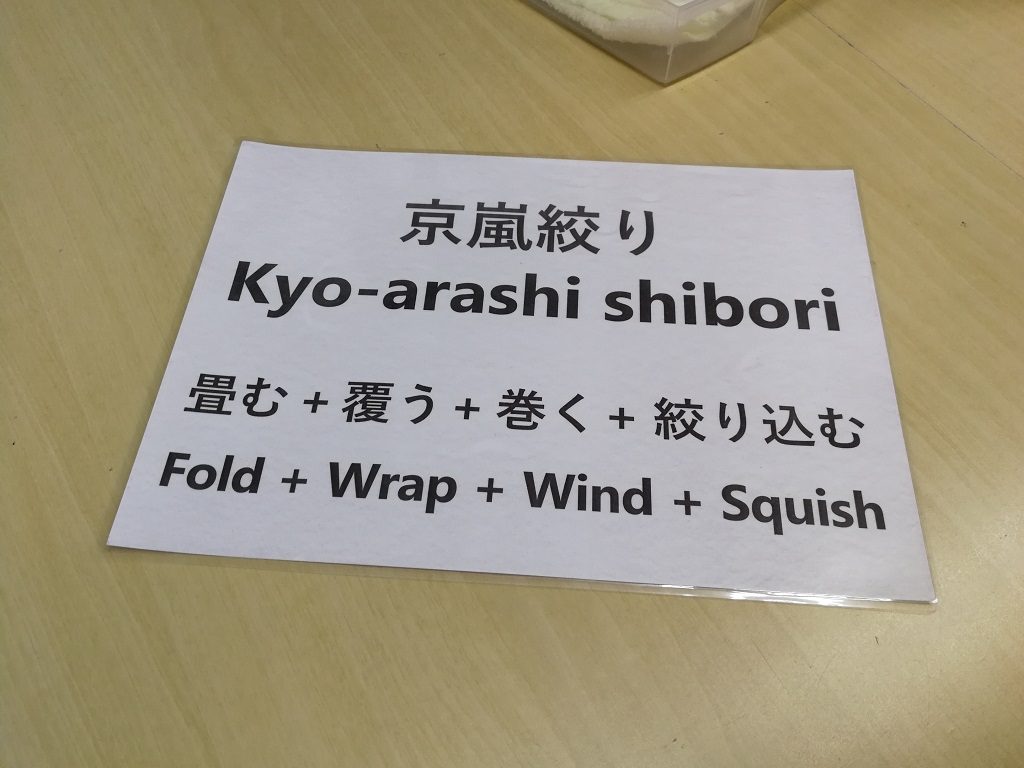 First, we fold the silk. Next, we wrap the silk around the pipe and use rubber bands to keep the silk snug to the hot water pipe. 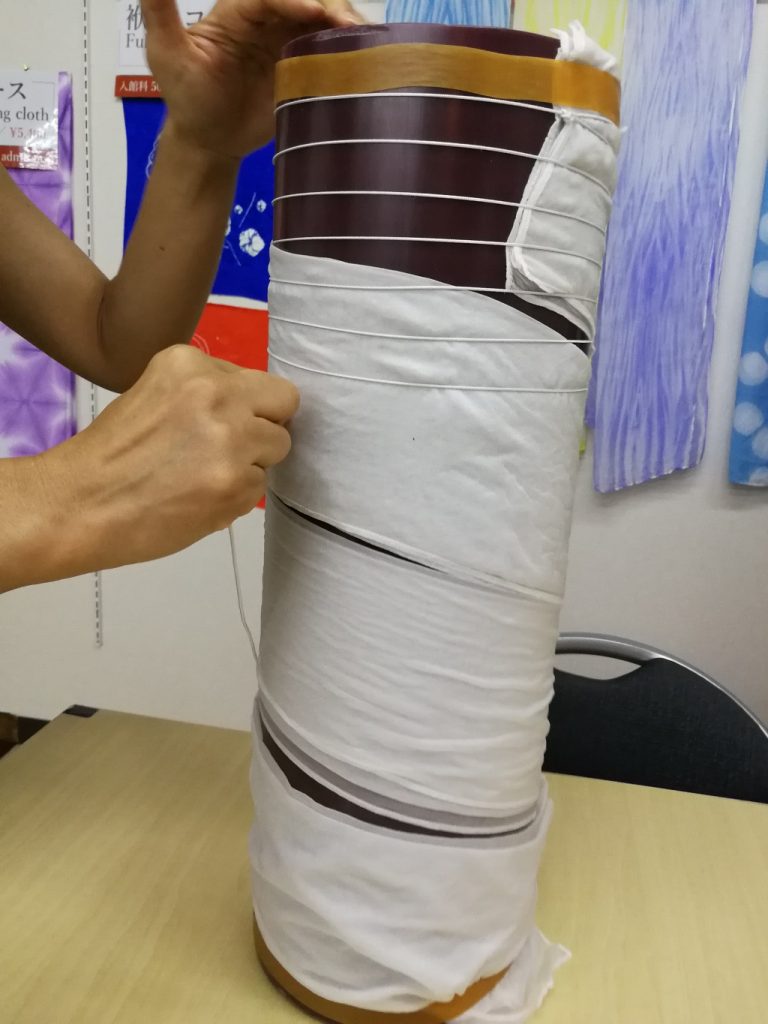 After that, we wind the string overtop the silk. 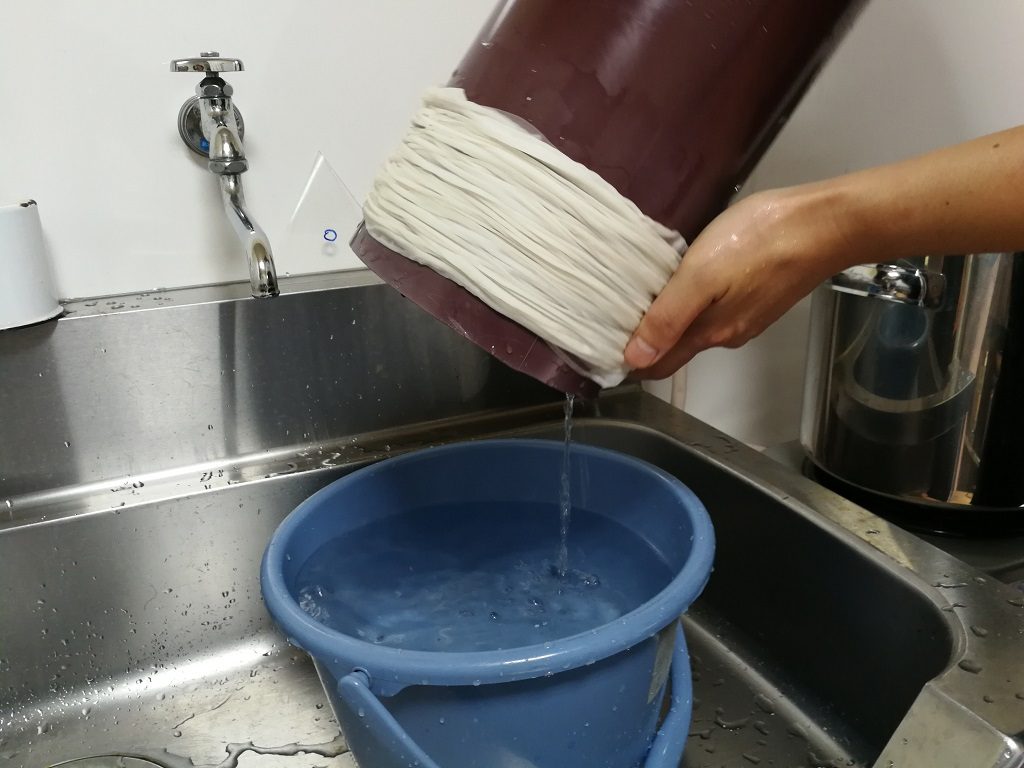 Wet the silk before dyeing. Dunk and dye silk in hot water. You were probably thinking, “why a hot water pipe?” An artisan thinks of everything…in order for the dye to absorb into the material, creating the patterns and designs, the water needs to be at a certain temperature. In this case, we need hot water and we can’t have the pipe melting on us. 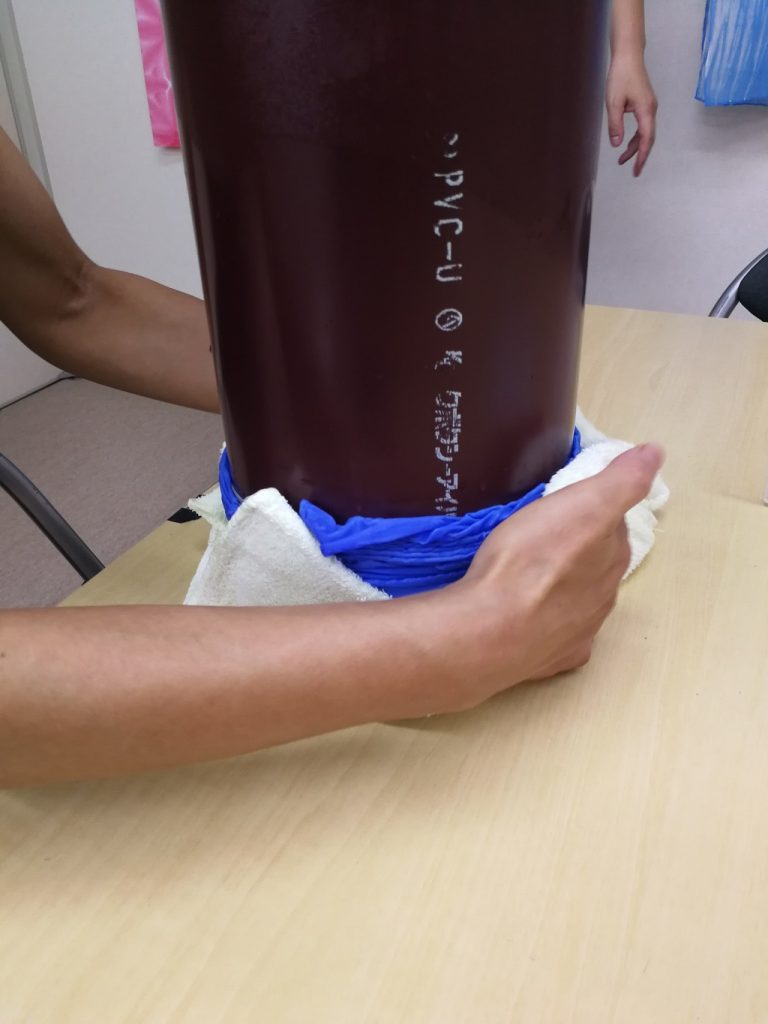 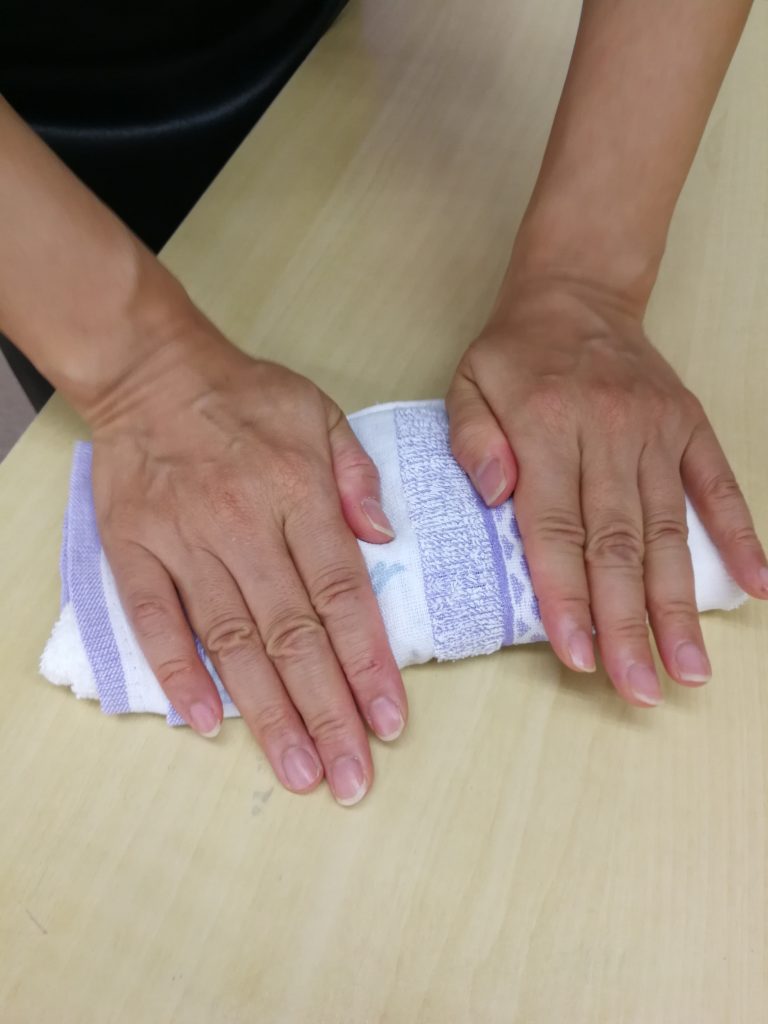 Dry off a little more… This is the intricate process involved to produce kimono and other goods produced by the artisans. They split the jobs up and have one artisan specialized in one area. For example, one artisan specializes in Stenciling, Tying, Dyeing…When you take a shibori class, you gain free entrance to the museum and you can watch the DVD, usually an extra 500 yen. This is the museum, displaying an incredible range of Kyo shibori artistic pieces. Gives you more of an appreciation for Kyo shibori as an art form. Admission to the museum is 500 yen. Entrance is actually included in the price of a shibori class at a very reasonable price. Arashi Shibori-this is one of their latest dyeing techniques and the one we tried! 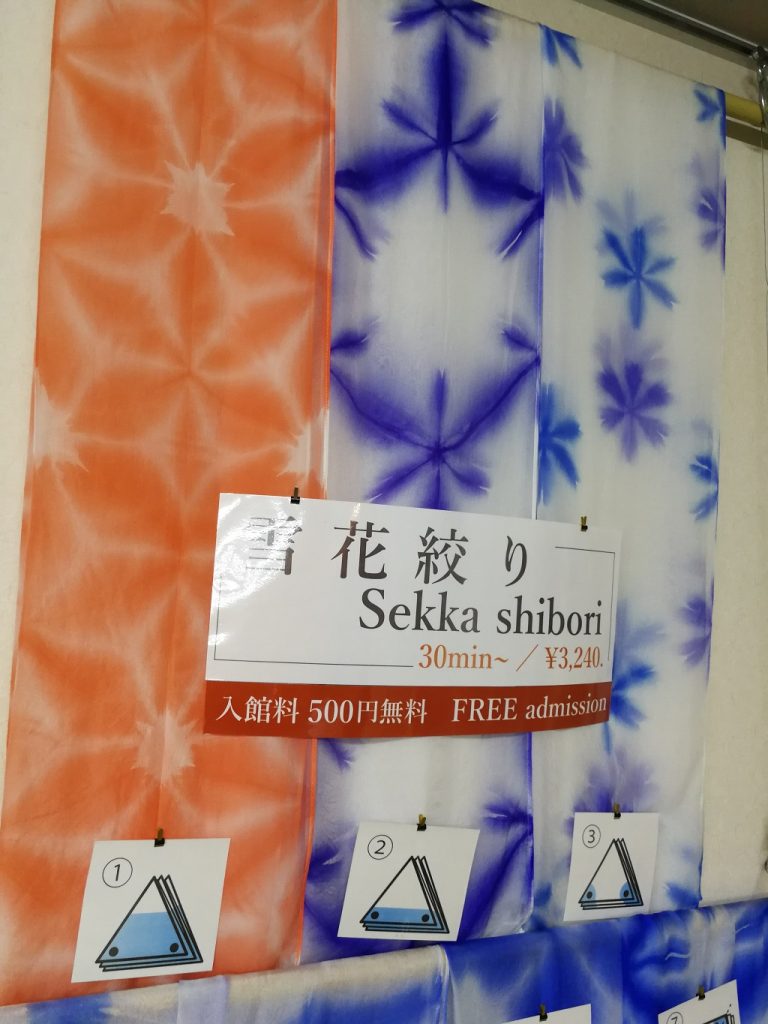 Sekka Shibori-another popular dyeing technique you can use to design your own scarf. There’s also a shop selling original Kyo shibori goods making great souvenirs or picking up something for your self. 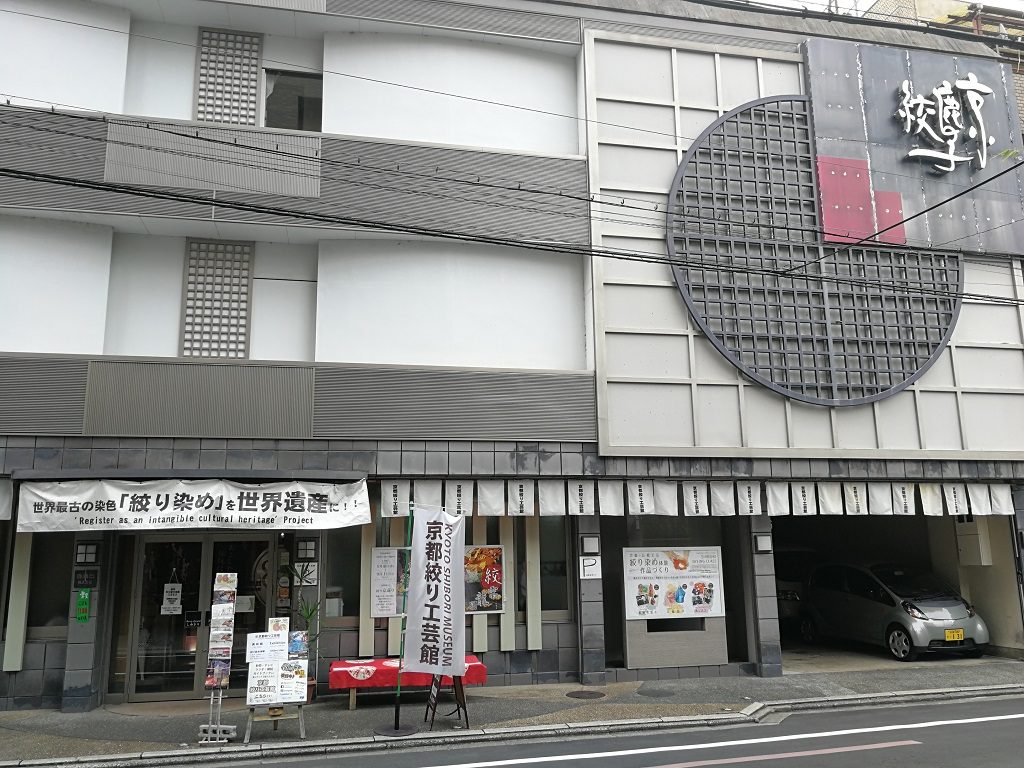 Kyoto: Through the Eyes of Local Experts

Think of me like your local friend who happens to be a professional guide. Originally from Canada, I’ve lived in Kyoto for the past 18 years, plus worked at one of the best hotels in Kyoto for 2 years. Through my interviews with locals, I hope you get a feel for Kyoto by listening to their unique stories.

If you’re interested in tours or struggling to plan your trip to Kyoto, I offer tours and/or personalised trip consultations for Kyoto and beyond. Check out my website Hands On Kyoto. I can’t wait to help you discover the hidden side of Kyoto!