(Class bell rings) Welcome back class, we have another exciting discovery for you found in the parts of Kyoto where local transportation is only available. It was my first time visiting this area called “Nibancho”. Such a peaceful place with the Kyoto Japanese traditional aesthetic, tons of old-fashioned buildings, temples and shrines to marvel at. This town really had its own vibe and out of the way of the touristy area of Kyoto. This week`s discovery as well had its own vibe, one that fit well in this peaceful town. Today we are going to touch on a Japanese word which will probably be one of the first words you learn when you get here and has a very deep meaning to it. I won`t keep you guys waiting any longer, let`s get this party started!

Have you guys heard of this word before? Again, this is probably a word you have heard before if you have been in Japan or lived here. This word has a few different ways to be used in Japanese, but it basically means “to receive or to accept”. Right before the Japanese eat their meal, they will say “Itadakimas”. It translates to saying they are thankful for the food they are receiving to eat. On the surface level this is the basic meaning, but it goes even deeper as Japan has a very spiritual background due to Buddhism being a very big part of their culture. It takes a lot for the food you eat to be brought to your table. For this reason, we have to be thankful for all these actions that took place to give us nourishment to help us move forward in our daily lives, hence they say “Itadakimas”.

I am sorry to have to start off so deep this time with this adventure, but the name of the restaurant sets the vibe for what you will be in for today. Now knowing the meaning of Itadakimas, Zen is not the traditional Zen you relate to meditation, but this Zen means “to repair”. So after talking to the owner of the store, he told me the food we receive,repairs our body physically, spiritually, and mentally.

With that being said, the dishes served here are based off of traditional Japanese cuisine. One of the main ingredients used is soy, and if you know anything about Japanese culture, they took the soy bean and created many different foods with it. A lot of traditional Japanese foods are fermented and fermented foods are great for nourishing the body. After tasting the food, you could really understand how food has healing powers. I mean, you are what you eat right? The food was light in taste, but packed with a punch of traditional Japanese sauces, especially Miso, one of the few fermented foods of the Japanese culture. Before I get too much into the food, the interesting thing about this restaurant is that originally started in Europe. The branch in Kyoto of this franchise was only opened three years ago. If you check out their website they have a few more branches around Japan as well. The original Itadaki Zen has been open for 11 years and counting! The owner of the Kyoto branch is the son of the original creator of the store. They were originally from Japan, but they moved to Europe and created Itadaki Zen. He has always been around food his whole life, and he seemed pretty devoted to opening more stores across the world. I asked what does the future hold for Itadaki Zen, and he said, “I want to make vegan food more available for the mass public.” He said for his whole life he has been vegan and he intends to keep it that way. It was great to talk to someone so passionate about their craft.

I think I gave you guys enough background information on this place. Let`s get to what you guys are really waiting for!

Check out the interior of the place to really get the whole experience of Itadaki Zen. 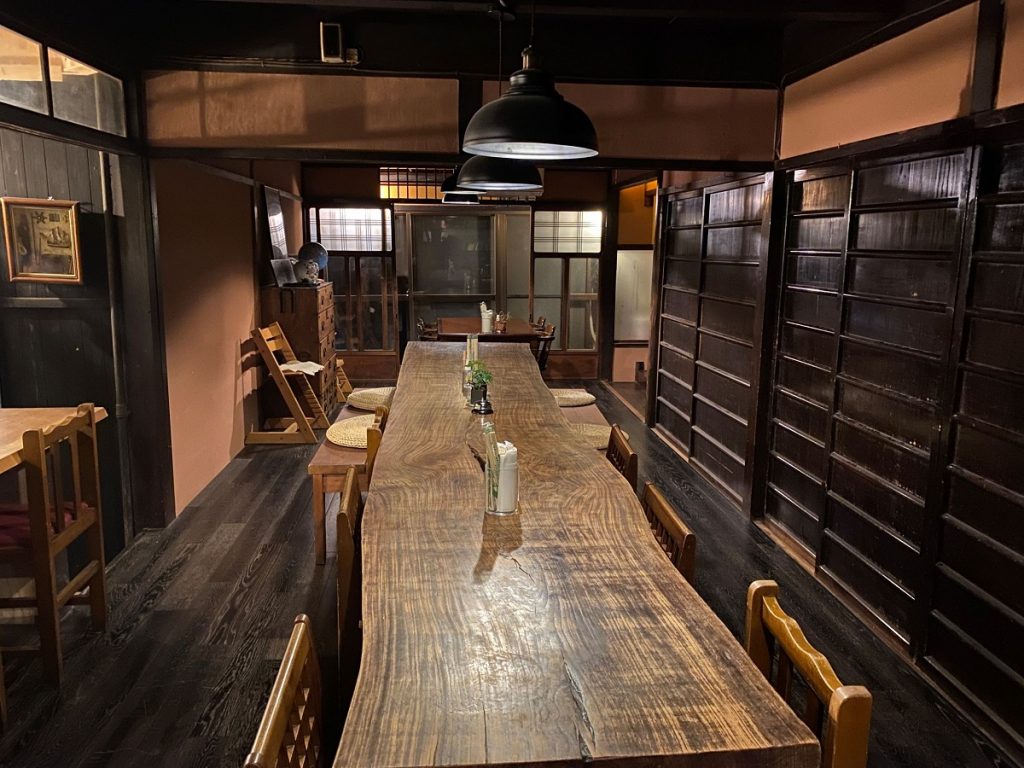 The building was originally a Japanese traditional house. They pretty much kept that aesthetic with a little bit of renovation. 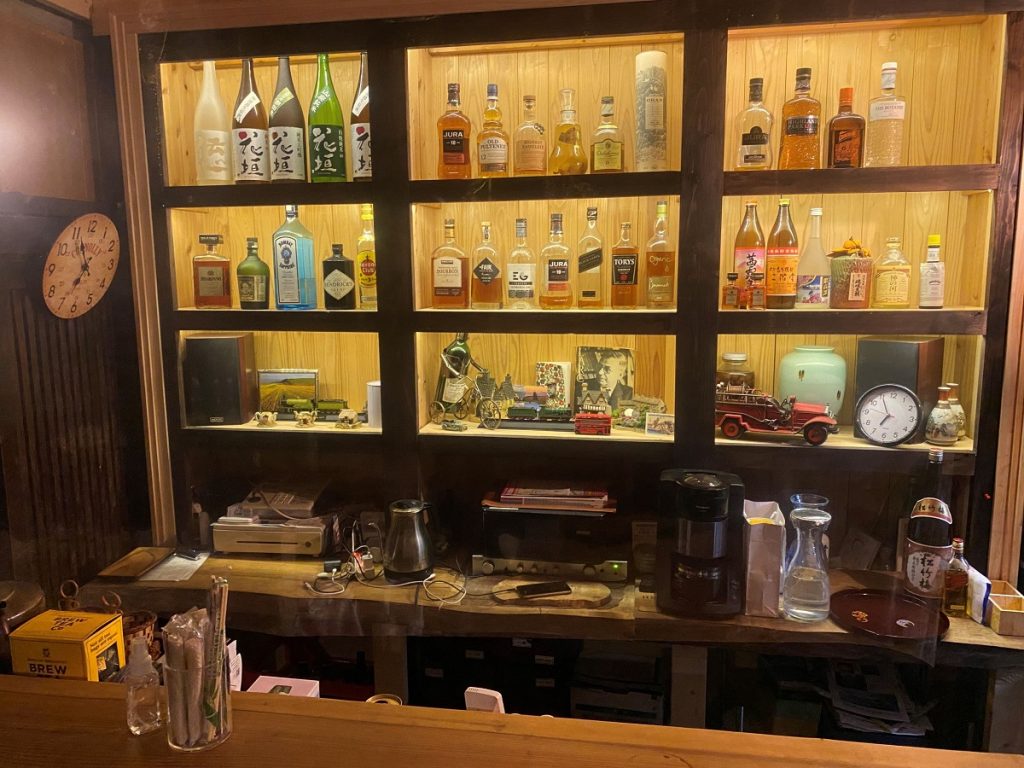 For those who could enjoy a nice drink, they also have an array of different alcohol to go with your meal. 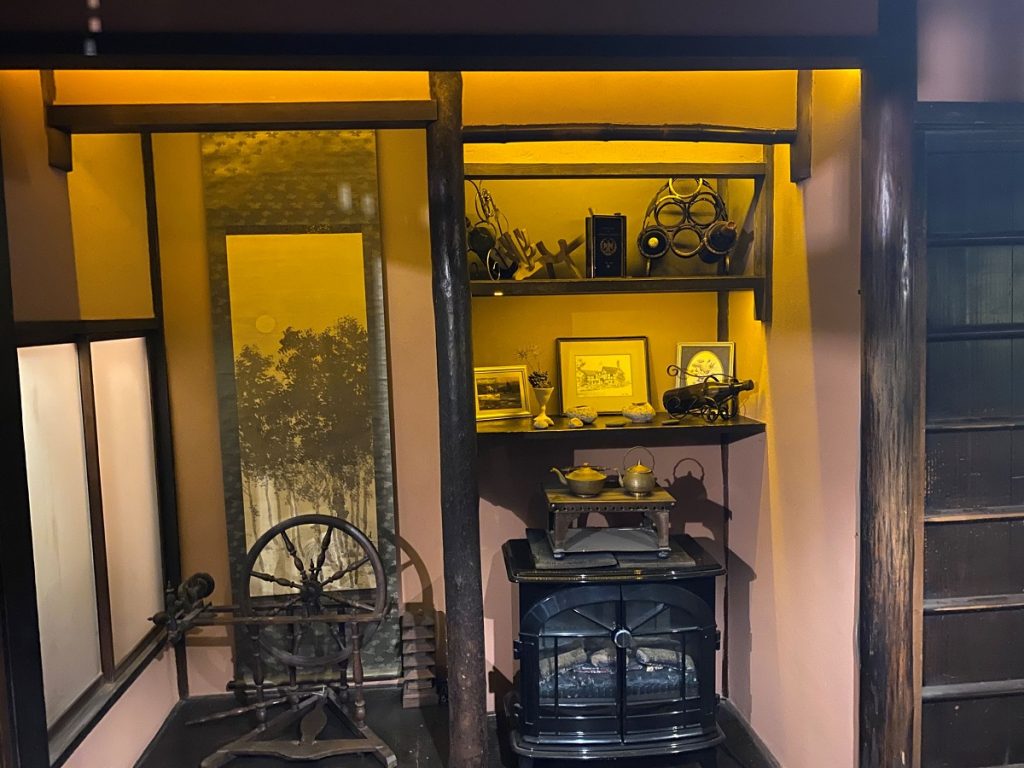 This was in the back of the room from the first picture. The place was nice and cozy and I think it would be a great place to take someone on a date.

Just before we get to the food, you have to see what they have. Hold your horses, the food is coming right after the menu. 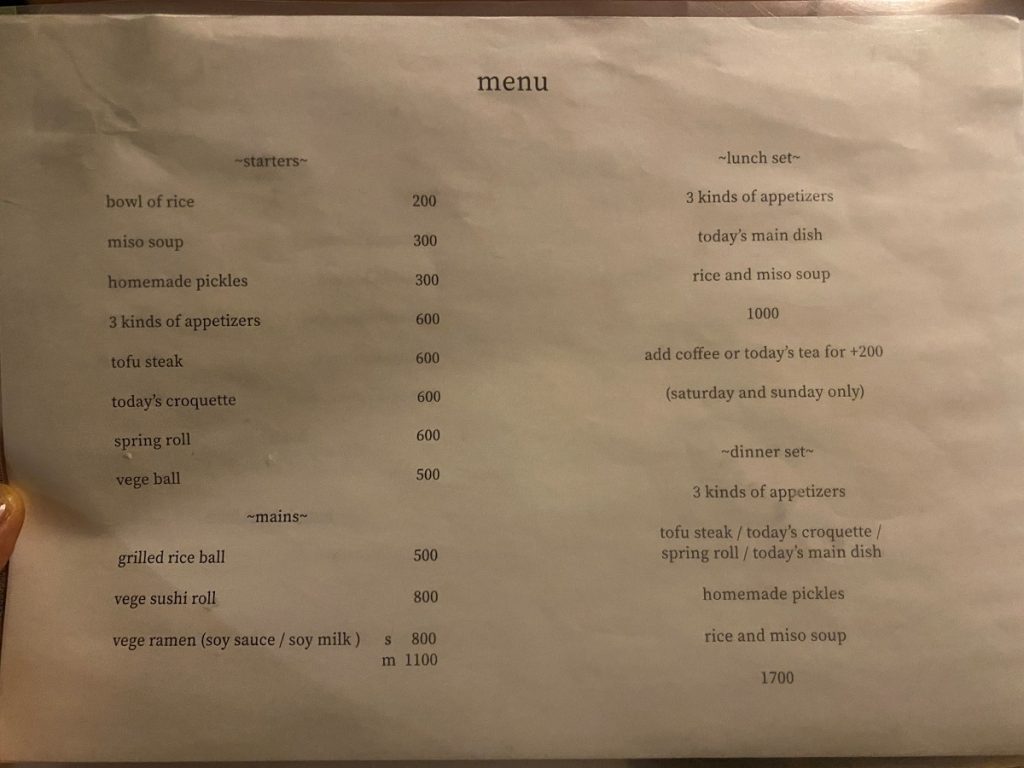 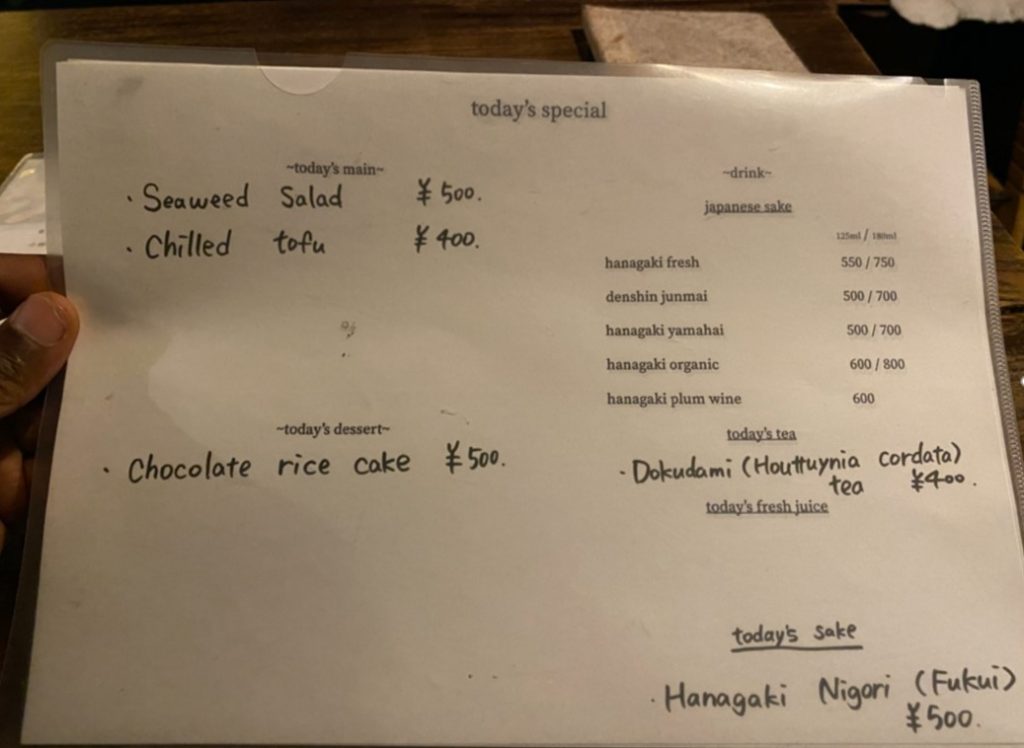 Here is the English version, simple and clean like the aesthetic of the store. Food can change daily, depending on what ingredients they have available. Vegetables and fruits are locally grown and organic.

I asked the owner what he recommended, and that was the dinner set. They are also known for their vegan sushi as well as their ramen.

, a main dish, homemade pickles, rice, and miso soup. The main dish I chose was the seaweed salad.

Now that I covered everything, LET`S GET TO THE FOOD! 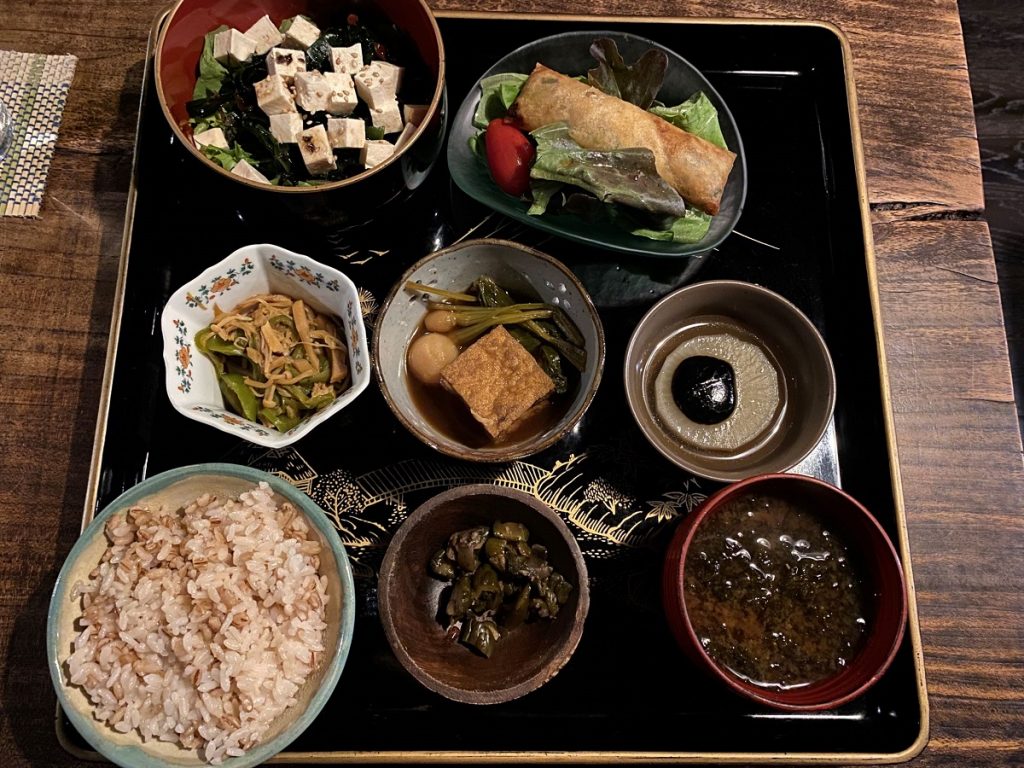 Let`s take a look at what we have here. 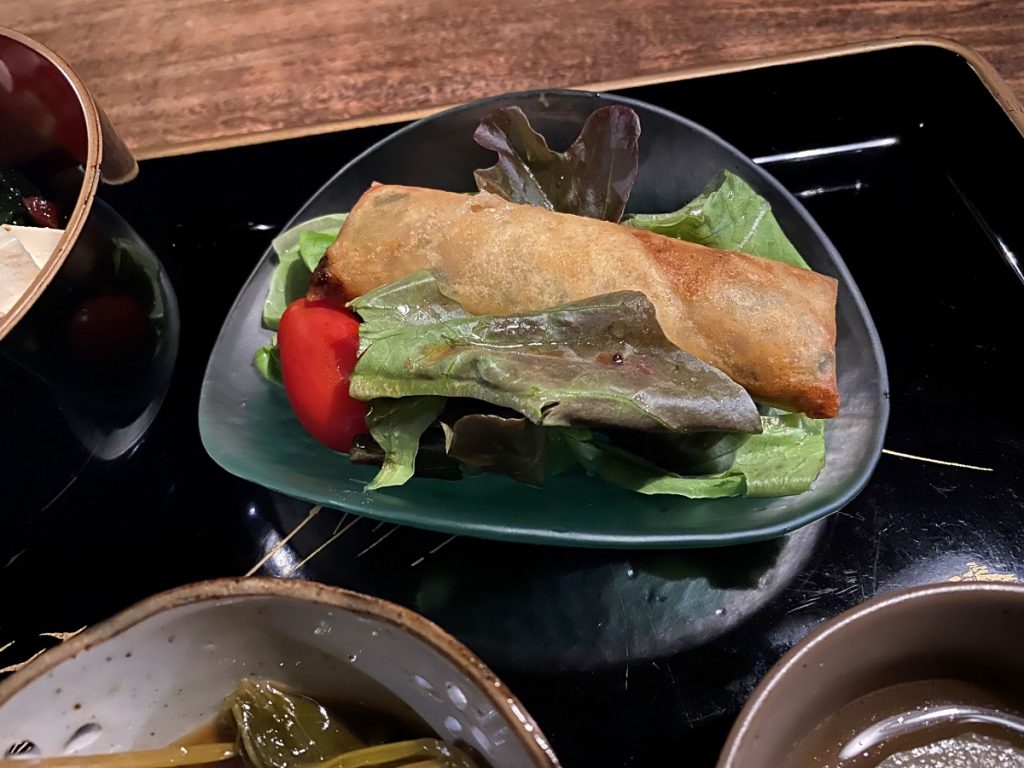 A traditional spring roll fried to perfection, nice and flaky. When I bit into it I got hit with tons of flavor from seasonal vegetables dressed in a light sauce. 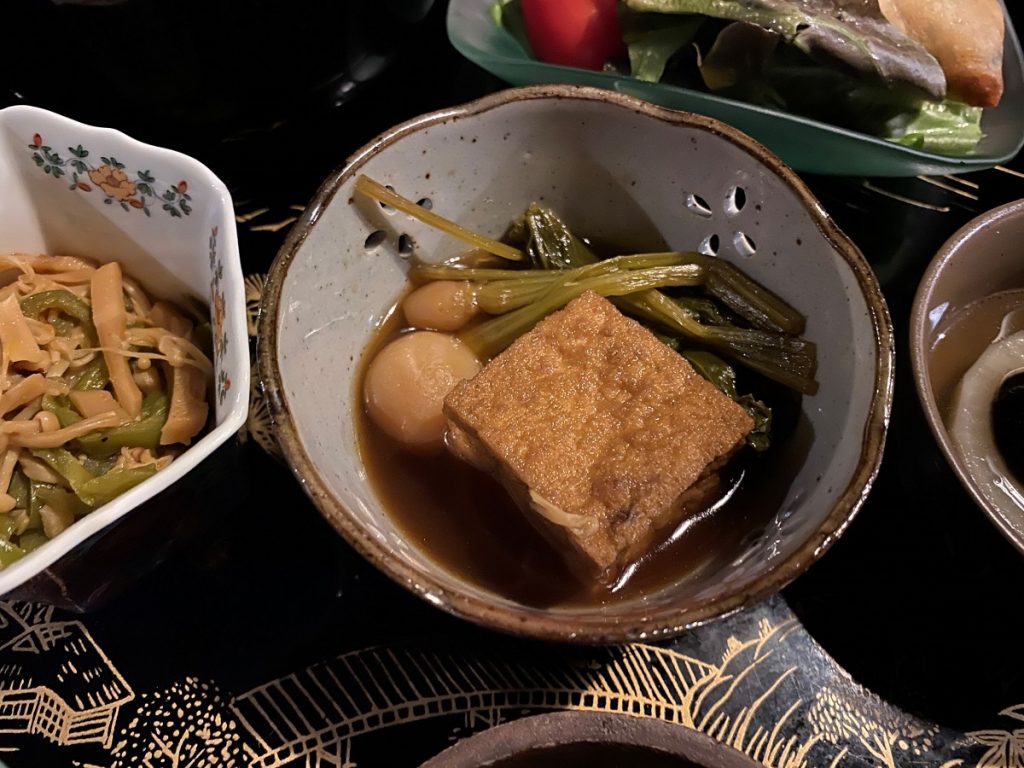 Here we have fried tofu and radishes drenched in a vegetable-based soy sauce. 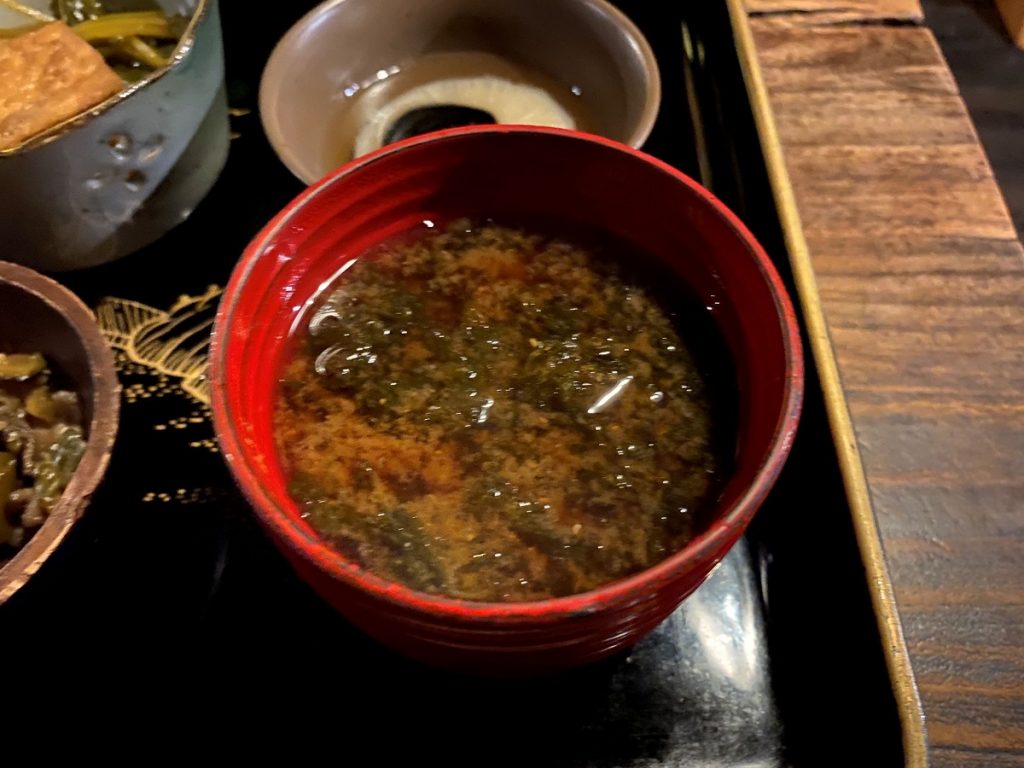 Another traditional dish, miso soup! I really remember enjoying the deep flavor of miso in this soup. At Itadaki Zen they create their own Miso. It was definitely much richer in taste than a lot of miso soup that I have tried before. Here is the main dish, and my favorite of all the dishes in the set, the seaweed salad. Seaweed mixed with romaine lettuce, and cut pieces of tofu drizzled with sesame seeds and sesame dressing. I could definitely eat that every day! 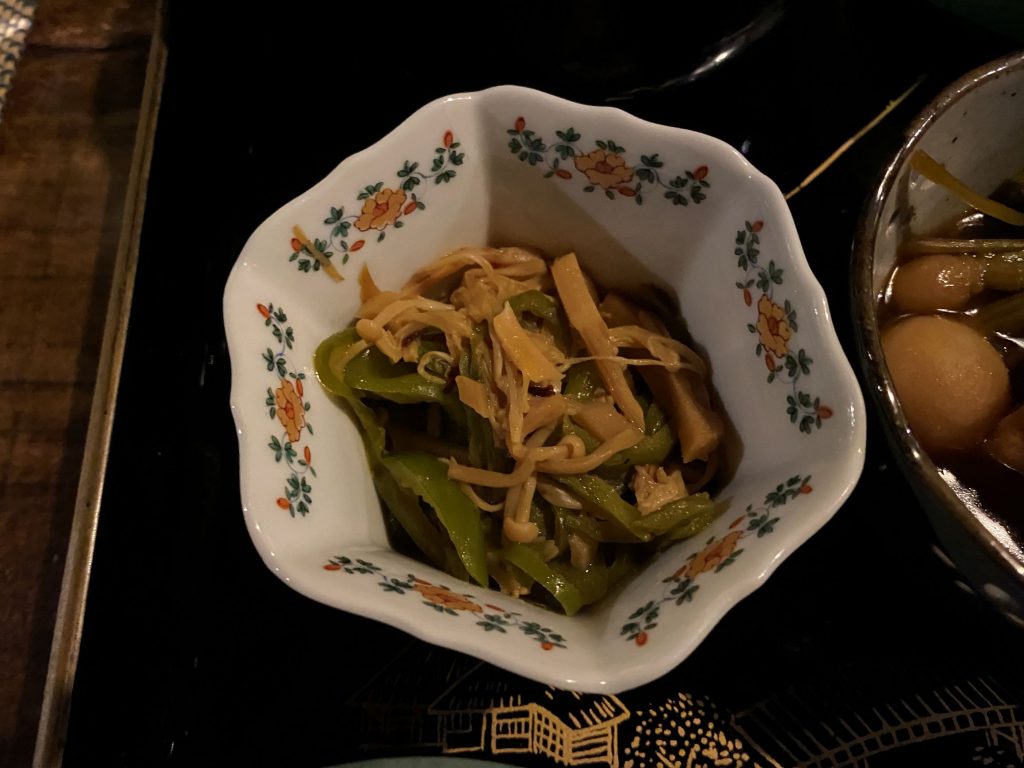 This dish was filled with green peppers and enoki mushrooms covered in another soy sauce based sauce. 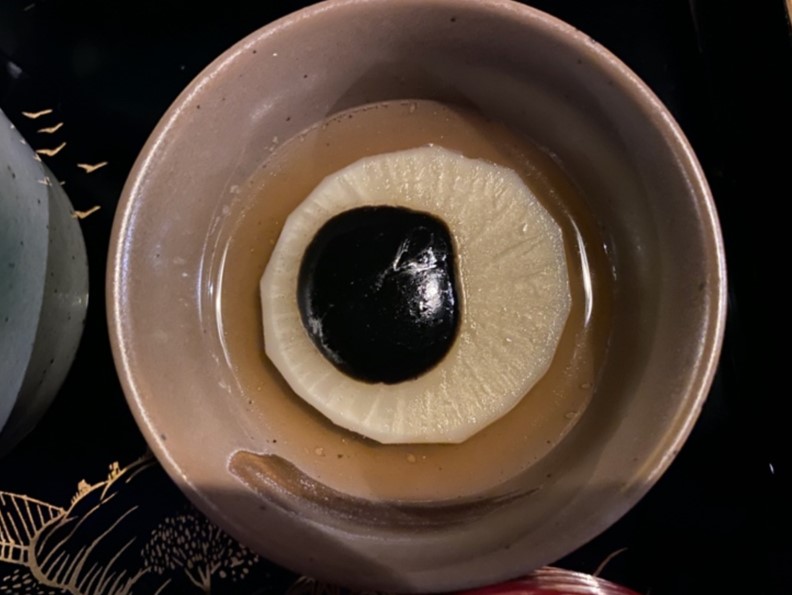 Doesn`t this look tasty? It was, (before I devoured it) Daikon, a Japanese radish, with a glop of their homemade miso on top. If you want to experience real traditional Japanese flavors, this will take you there. 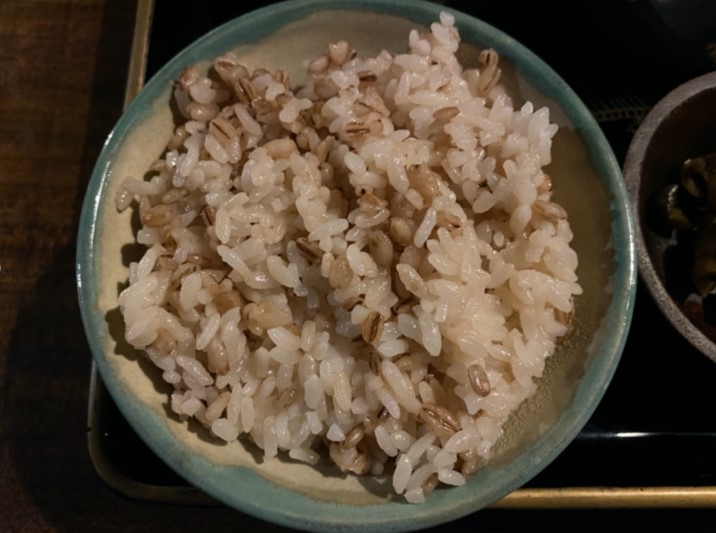 Here we have rice mixed with barley. Last but not least homemade pickles.

I savored every bite of the meal, and I was in awe from the overall experience that I forgot to take a picture of what was left from the meal. Of course, there was nothing there, but it is a Vegan Discovery tradition I like to follow.

I was definitely satisfied after the meal, but it wouldn’t be right if I didn’t finish the meal off with an Itadaki Zen dessert.

The dessert for the day was: 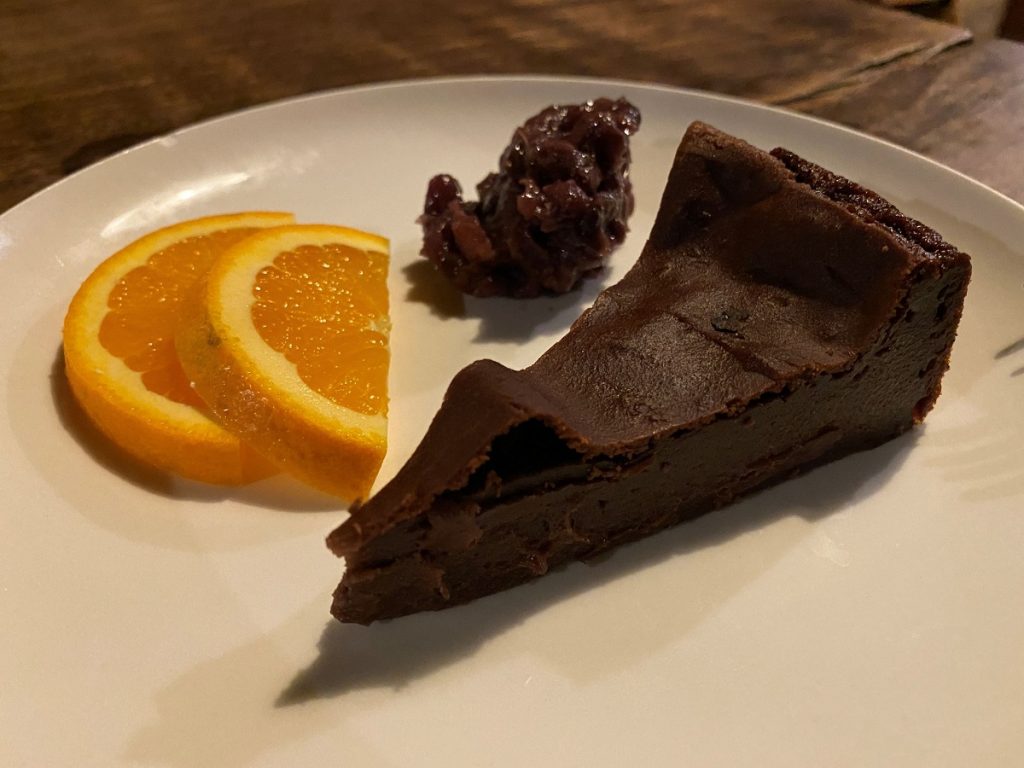 It was served with Japanese sweet beans, and two slices of an orange. They surprisingly all went well together. The chocolate cake as you can see in the picture was dense and had a fudge like texture. 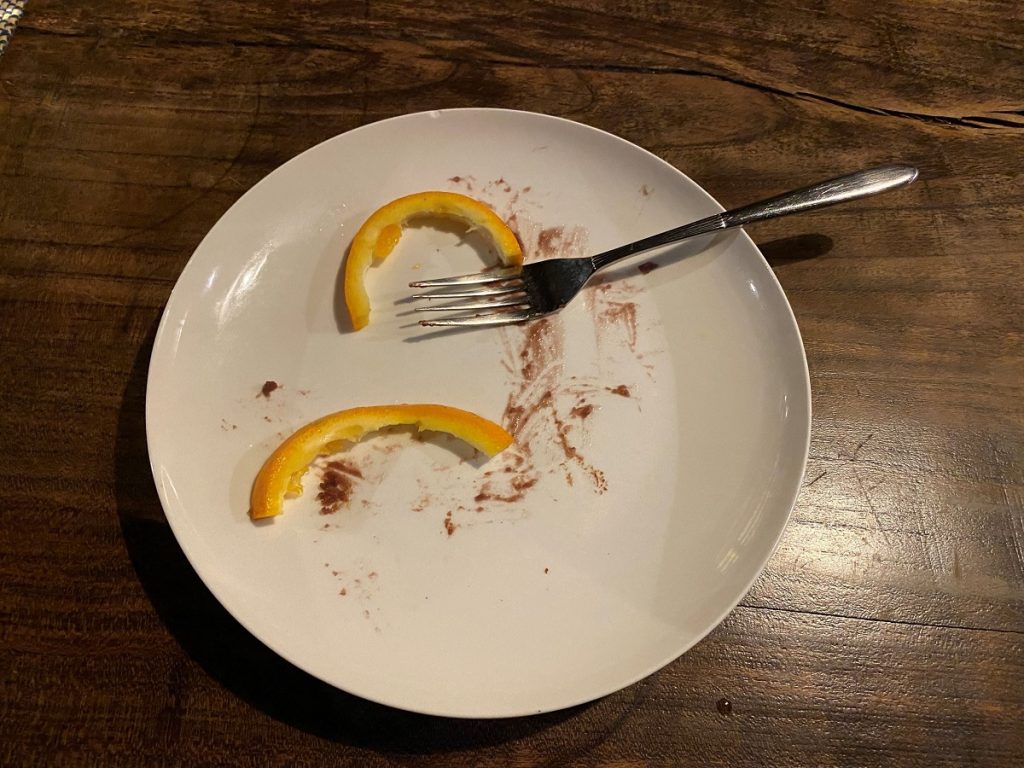 If you are looking for a traditional Japanese vegan based meal, Itadaki Zen is definitely the place that will give what you want and more. Itadaki, to receive food that was prepared for us and Zen where this food then heals us from the inside out really was portrayed in the experience of the meal. The atmosphere of the restaurant, the presentation and taste of the food really had me thinking about how important it is to be thankful for the food we have and the lengths and effort it takes to get to our hands. We can not only eat good at Itadaki Zen, but we can also learn a valuable lesson. Until next time. 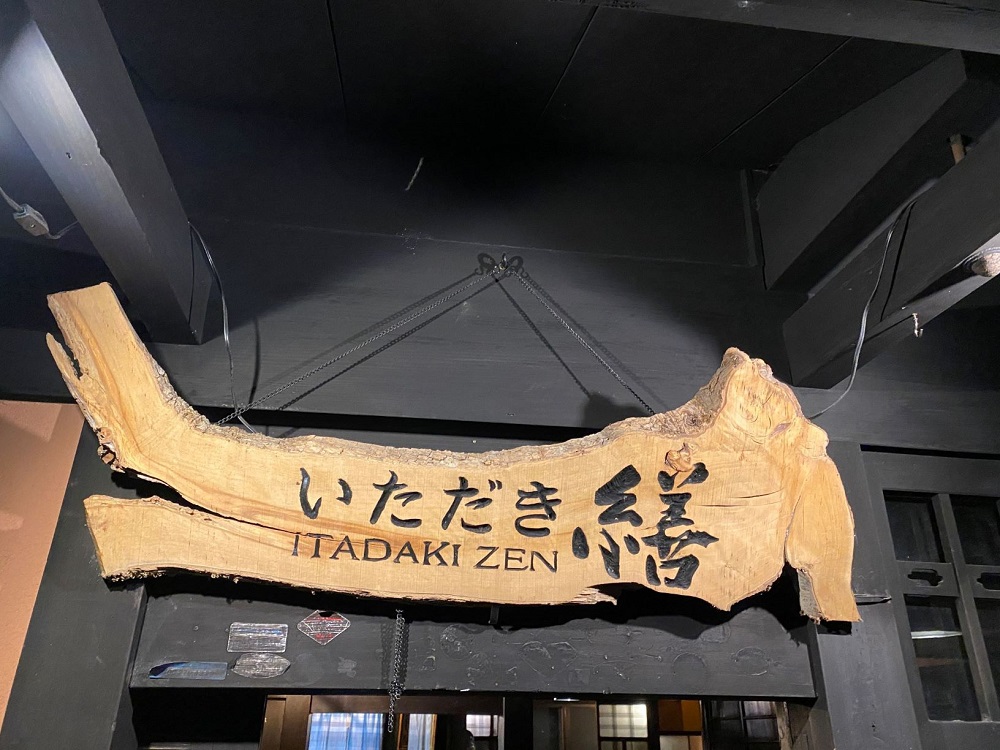