(Class bell rings) Welcome today class! Today we will be going over AIN SOPH Journey Kyoto. This simple, cozy, plant-based restaurant is “planted” right in the center of Kawaramachi, a very popular area for everyone to enjoy. In Japan, if you do not speak Japanese, it may be difficult for you to get around, but at AIN SOPH Journey Kyoto, they all could speak great English. Not only that, they had menus in English and very easy to follow. 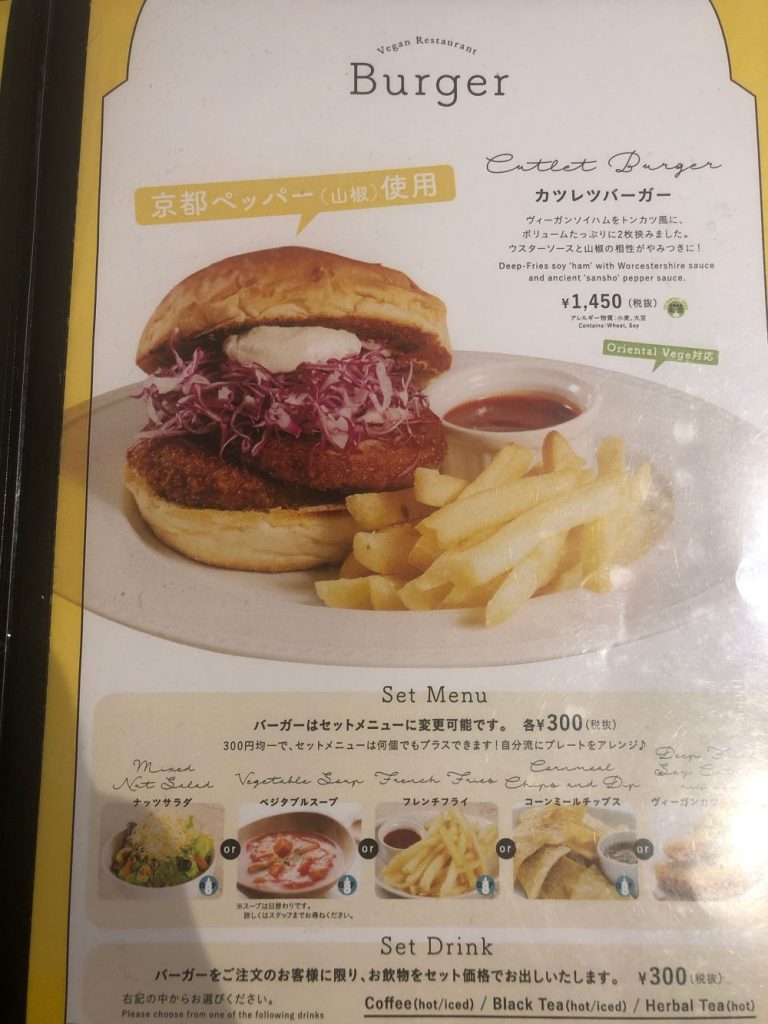 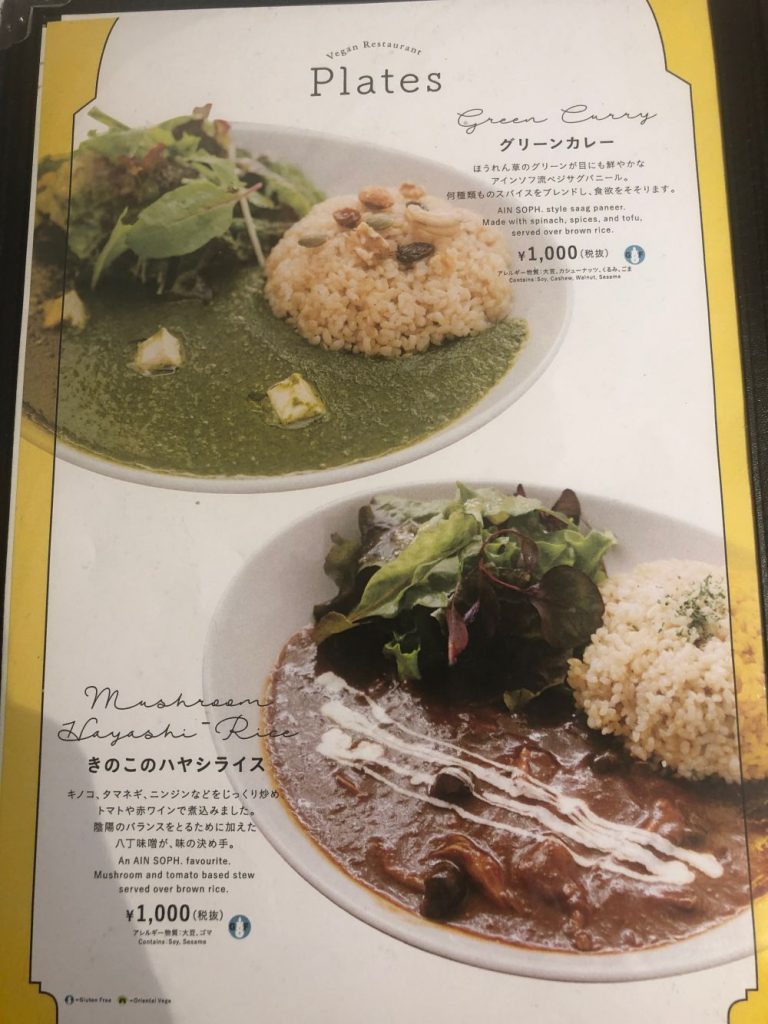 I have been to AIN SOPH Journey Kyoto a couple of times, (So you know it is good) so I wanted to try something new so I can give you guys a better recommendation on what to get! 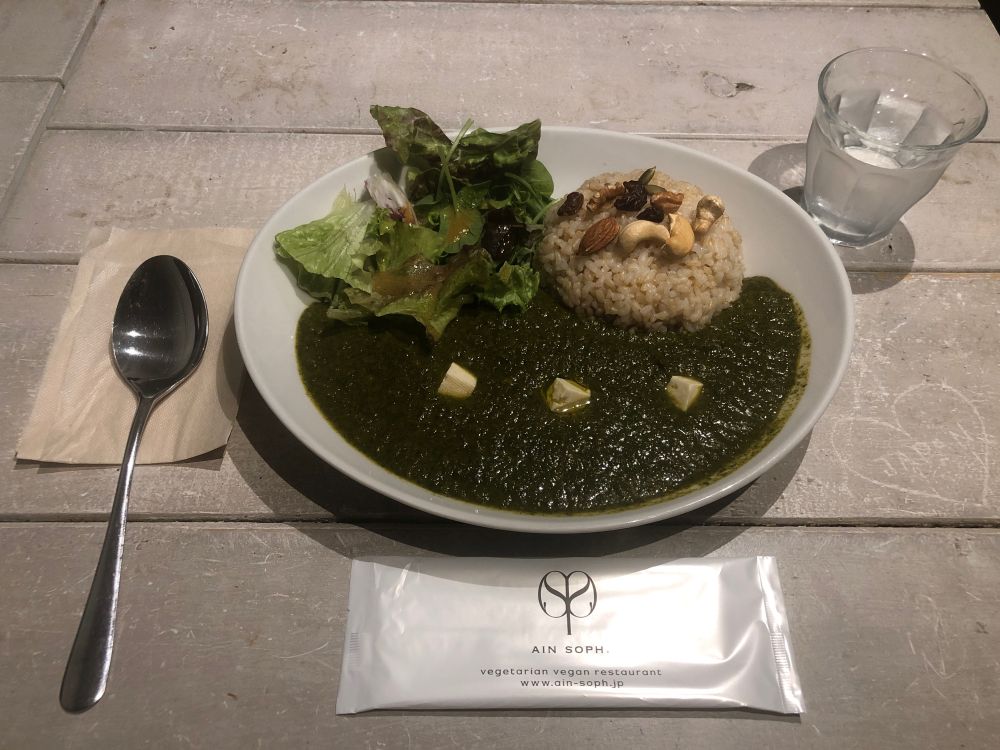 Do you see the nicely sliced cubed tofu with the fresh nuts sprinkled over the brown rice! Whoa! My mouth is watering right now thinking about it! 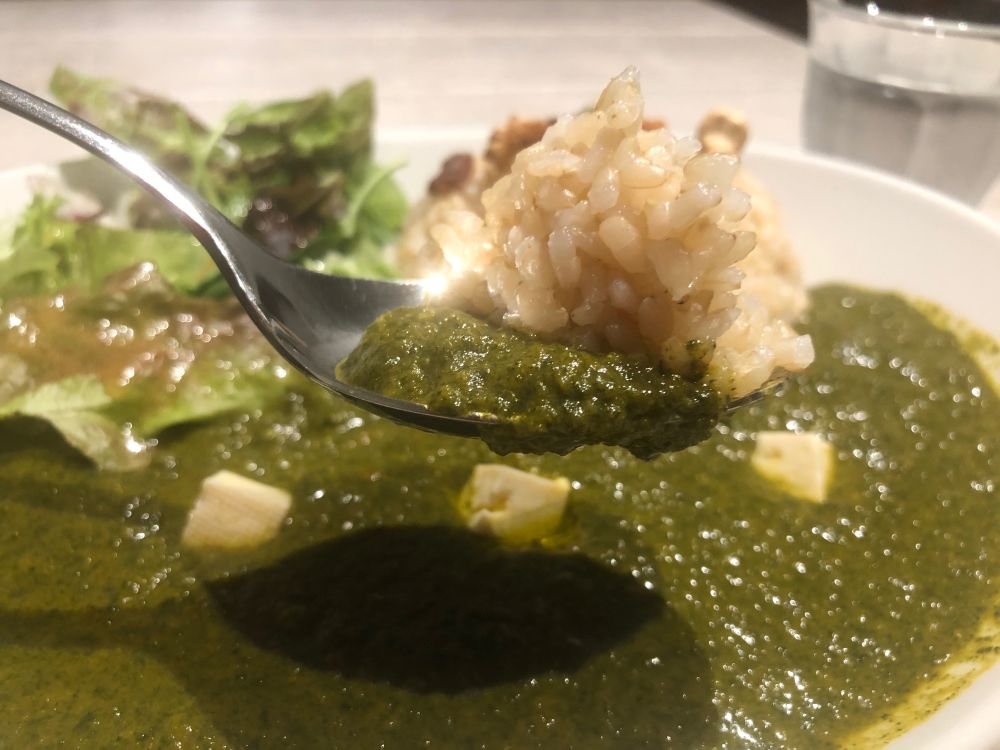 Not only did they serve me this great meal, they have a water dispenser, which has different organic fruits infused in it depending on what day you come in! 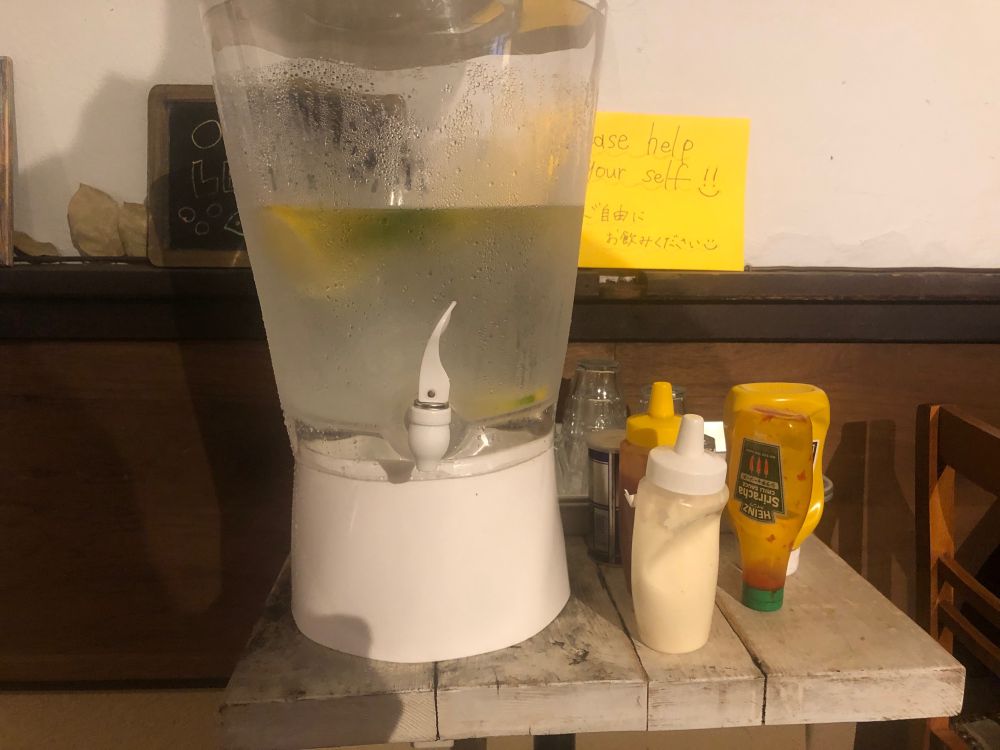 100% satisfied, and I found another option on the menu to look forward to!

After I ate that delicious meal, I had the pleasure to talk to the head manager at AIN SOPH named Megumi. She was a very calm and a kind individual, I could really tell she had a passion for plant-based food. She grew up in a city next to Kyoto called Nara. From a young age she didn’t like to eat meat. She would mostly eat a macrobiotic diet unless she went out with friends. (Common problem for plant-based eaters)

But, Megumi went to school to learn how to cook Macrobiotic food, and then she started teaching lessons on how to cook to people interested in this food niche. One day she visited the AIN SOPH website and was moved by the mission statement of the founder. She was so moved she was willing to move to the other side of Japan to work at the other AIN SOPH locations in Tokyo, but luckily for her and us, they opened up a location in Kyoto.

Now I am sure since the start of you reading this, you were wondering, “What does AIN SOPH mean?” I have the answer for you! It means endless, and every AIN SOPH location has its own theme. For the Kyoto location, it’s Journey. It is signifying l no borders, going out there in life and living the best life you can! It is not just about eating plant-based, it is a way of life! Cool right? This made me want to eat here more often by the meaning behind the brand. Now AIN SOPH means endless, but not in Japanese, in Hebrew! The founder is not Jewish either, Megumi said the founder was meditating one day and the name came to him! ( I want to meditate with this guy!) Now the food in AIN SOPH is not just for plant-based eaters, they wanted to reach the biggest audience, all people! So they have all different types of foods, salads, burgers, curry, and a bunch of great sides. They are trying to be an international food establishment. The goal of the founder is to spread AIN SOPH to other countries in the future. Megumi said 80 percent of the customers who come to AIN SOPH Journey Kyoto are foreigners! But then, Megumi gave me the final piece to love this company endlessly. (Wink Wink) She gave me their famous and super delicious Pancakes to try! 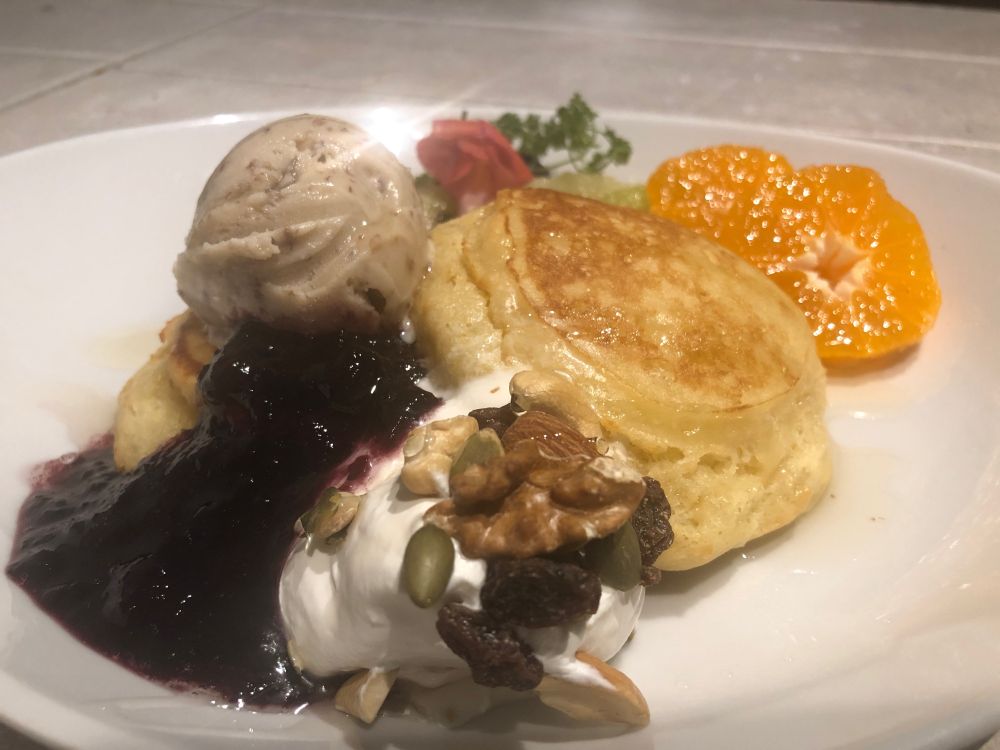 Only if you could see them in person! Art! Now I will say if you are thinking of American pancakes, you will be disappointed, but if you get past the name, the taste will surely have you wanting more than what they gave you. You get fluffy pancakes, with blueberry sauce, topped of with rum raisin ice cream and a side of fruit. I devoured that desert! Every bite was like heaven in my mouth. I love good food and meaningful conversation. I was fully satisfied with AIN SOPH. Now with the Kyoto location of AIN SOPH, they actually have an even more special desert that you can only have at this location, MATCHA PANCAKES!! If you are a Matcha tea fan, I would definitely recommend them, your belly will thank you! Last but not least, I asked Megumi what is the most popular item on the menu, and without a surprise, it is their cheeseburger, doesn’t it look great? 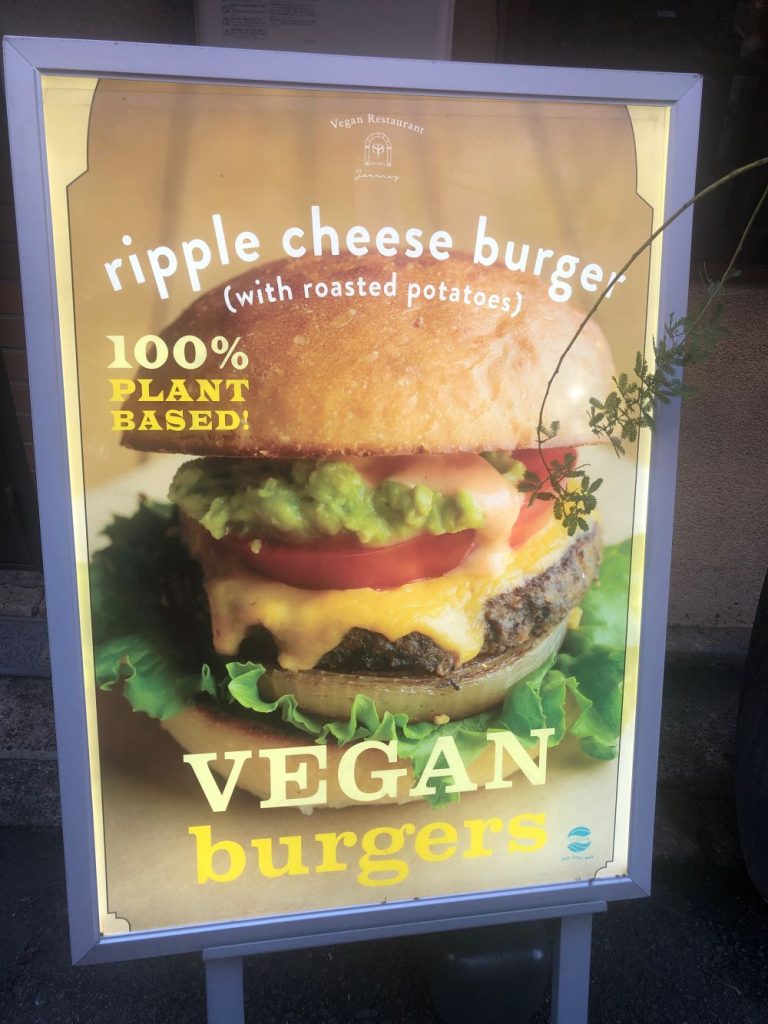 AIN SOPH Journey Kyoto is a great restaurant that not only offers delicious food, but they have meaning behind what they stand for. It is a very chill atmosphere where the staff is friendly and it does not matter if you are plant-based or not, the food will definitely take your taste buds on a ride. Go check it out for yourself if you don’t believe me! What do you got to lose?

Just so you don’t get lost, here is the address: 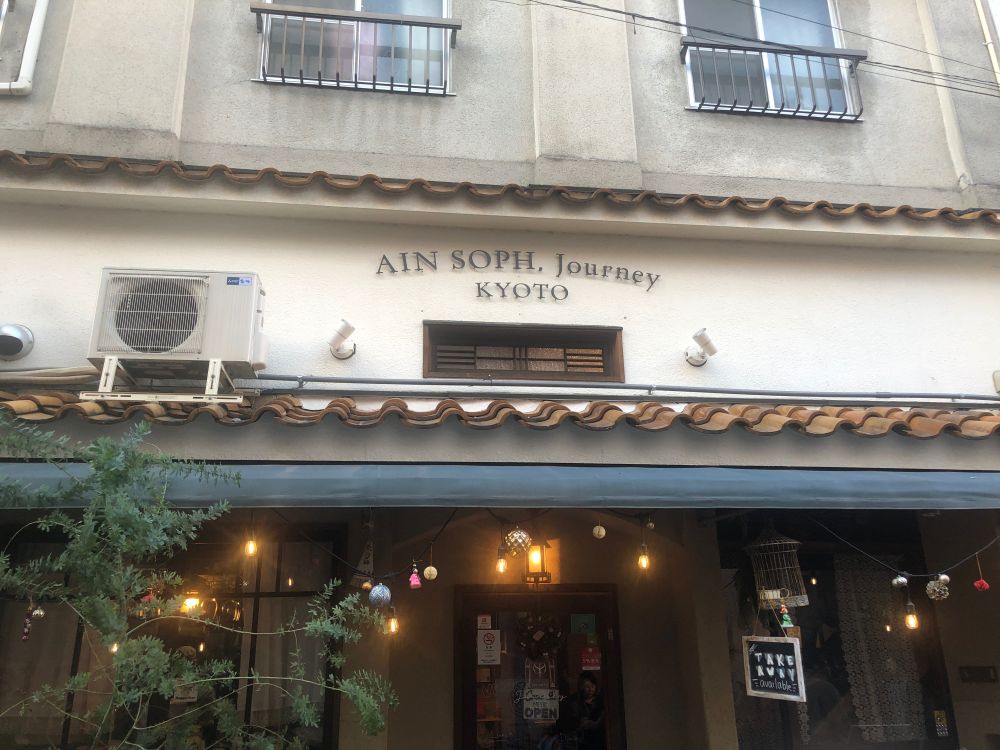